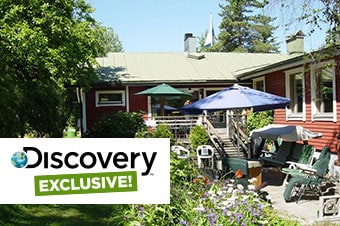 Departing your ship, you'll board your motorcoach as your begin your narrated tour, traveling along the shoreline for views of Suomenlinna Fortress, the "Gibraltar of the North" and a UNESCO World Heritage Site, as you head for the lush Sipoo district. Your first stop is the picturesque St. Sigfrid's Church. Dating back to the 15th century, it's the oldest granite church in the community, and has its own graveyard.

From there, you'll go to a traditional Finnish country home, situated by a picturesque lake. Here, you'll get an introduction to Finnish life and customs. You'll be greeted by your hosts, stroll the grounds, tour their residence, and then sit down to enjoy traditional refreshments of berry pie with tea or coffee.

After you visit, you'll return to your motorcoach for the ride back to city. Once there, you'll be able to see a number or notable sights, passing the Esplanade, Helsinki's famous design street, as well as the Market Place and the Presidential Palace before continuing on Mannerheim Street - the city's longest avenue - passing the Olympic Stadium, Opera House, Finlandia Hall, National Museum, Parliament and Kiasma - the Museum of Contemporary Art. You'll stop at Senate Square, center for arts, culture, religion, politics and education. Four main buildings make up the Square and were designed by famed architect Carl Ludvig Engel in the early 19th Century: Helsinki Cathedral, the Government Palace, the main building of the University of Helsinki and the National Library of Finland. Helsinki Cathedral is arguably Finland's most famous and photographed building; it celebrated its 150th anniversary in 2002.

Your adventure concludes with the short ride back to your ship, as you reflect on the tradition and innovation that makes Helsinki so unique.

Your home visit requires moderate walking over uneven surfaces and negotiating some steps.

Refreshments at a Finnish country home