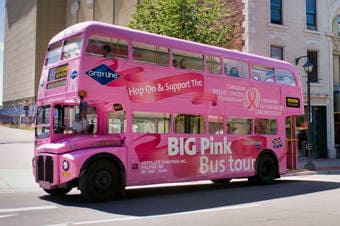 Relax and enjoy the scenic drive to beautiful Peggy's Cove. Explore the fishing community and the different types of fish traps used locally and maybe even touch a live lobster, browse the shops, and visit the famous lighthouse. Here you'll stand in awe before the graceful red and white structure that stands sentinel on a rugged outcrop of massive granite boulders. According to legend, a woman named Margaret was the only survivor of a schooner that ran aground and sank more than 200 years ago. The picturesque fishing village where she made her home was named Peggy's Cove in her honor and when a particularly photogenic lighthouse began drawing generations of shutterbugs a world-class sensation was born! Now it's your turn to visit this enchanting locale to capture picture postcard views.

Back in Halifax, climb aboard the colorful authentic London double-decker buses. You'll explore the city at your own pace traveling on a 90 minute hop-on hop-off loop route featuring all the most visited sites. To immerse yourself in Nova Scotia's rich maritime legacy while indulging your interest in everything Titanic, hop off at the Maritime Museum of the Atlantic. The Historic Properties is a charmingly renovated 19th century district where you can walk in the footsteps of privateers, merchant marines and naval officers. Want to meet the city's most beloved citizen? Make time for the fascinating Museum of Natural History where you'll get acquainted with the local flora and fauna and get up close and personal with a Halifax celebrity: Gus the Tortoise who is nearly 100 years old.


If shopping along the busiest pedestrian street east of Montreal is your cup of tea, make your way to Spring Garden Road. Chock full of inviting restaurants as well, this may be the perfect time to get off your feet over a delightful meal. You'll be equally refreshed with a tour of the Halifax Public Gardens, the oldest original Victorian garden in the country.

Art lovers won't want to miss the Art Gallery of Nova Scotia and military history buffs will have a field day at the Halifax Citadel National Historic Site of Canada where the Royal Artillery sports the crimson pillbox caps and 78th Highlander Regiment tartan of bygone days. They bring heady days to life, a time when Halifax was a key army station in the British Empire, with the skirl of bagpipes, the daily noon-time firing of the twelve pound, smooth-bore, muzzle-loading gun that's reminiscent of King George's reign (1760-1820).

If boutique shopping is more to your taste, hop off in the Hydrostone area in Halifax's North End where you can visit the artisan shops and enjoy architecture of the hydrostone homes built after the Halifax Explosion in 1917, and even go visit the Fort Needham Bell Tower where you can view what locals call the narrows of Halifax Harbour where the explosion took place.

Completing this ideal combination of adventures back at the pier, your full-day tour of Halifax comes to an end. It's hard to find an easier, more convenient way to explore this extraordinary part of the world!

1. YHZ-125A Peggy's Cove & Hop On/Hop Off Bus Tour
Holders of YHZ-125A ticket will start at the pier directly to Peggy's Cove, then upon return have access to the Hop on Hop off onboard the Double Decker Buses

2. YHZ-125B Hop On/Hop Off Bus Tour & Peggy's Cove
Holders of YHZ-125B ticket will start at the pier with their Hop-On Hop Off Double Deck Tour in the morning and early afternoon they will start their scenic drive to Peggy's cove at the time indicated on their ticket.

If your tour ticket states YHZ-125A, you will go to Peggy's Cove in the morning and Hop On Hop Off upon your return from Peggy's Cove. If your tour ticket states YHZ-125B, you will take the Hop On Hop Off in the morning, prior to your Peggy's Cove departure time early afternoon, as indicated on your ticket. Admission fees to selected venues are not included. The Hop on Hop off route departs approximately every 15-30 minutes from the pier. A portion of the proceeds from this tour is donated directly to the Canadian Breast Cancer Foundation. The tour cannot store wheelchairs on the double decker.

Drive from ship to Peggy's Cove

Drive from Peggy's Cove to Pier

Tickets: YHZ-125B will first start their Hop-On Hop-Off tour segment, then go to Peggy's Cove in the afternoon