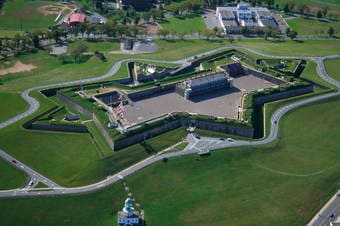 What you will visit:
Double Decker Hop On/Hop Off Bus Experience
Climb aboard an authentic London double-decker bus and travel on a 90-minute hop-on hop-off loop route featuring all the most visited sites. This tour includes Express-Pass admission to the Maritime Museum and the Halifax Citadel National Historic Site. Additional stops include The Maritime Museum of the Atlantic; The Historic Properties, a charmingly renovated 19th-century district; the Museum of Natural History where you'll get acquainted with the local flora and fauna; the busy pedestrian street lined with shops and restaurants, Spring Garden Road; and the fashionable Hydrostone area in Halifax's North End. Admire the blooming Halifax Public Gardens, the Art Gallery of Nova Scotia and the Halifax Citadel National Historic Site of Canada. The tour conveniently concludes at the pier.

Citadel Fortress and Army Museum Halifax Citadel
Delve into the significance of the 19th-century Halifax Citadel, a National Historic Site of Canada. This star-shaped fortress, completed in 1856, is actually the fourth fort to grace Citadel Hill. Learn the key role it played as Halifax's naval station throughout Canadian history and view its defensive ditch, earthen ramparts, musketry gallery, garrison cells, guardroom, and barracks. The Army Museum Halifax Citadel within the fortress has been showcasing the compelling story of Canadian military operations since 1953. Peruse an extensive collection of Nova Scotian military paraphernalia, uniforms, decorations, edged weapons, firearms and more.
Maritime Museum of the Atlantic
Situated right in the heart of Halifax's historic waterfront and overlooking the harbor, the Maritime Museum of the Atlantic celebrates Nova Scotia's seafaring heritage. Canada's oldest and largest maritime museum draws interest for its Titanic artifacts, including the ship's only surviving deck chair and an intricately carved door topper copied for the movie Titanic, and an exhibit detailing Halifax's response to the 1912 sinking. There are many other interactive displays and exhibits on the age of steamships, a variety of local small craft, the Royal Canadian and Merchant Navies, the ships of World War II and The Battle of the Atlantic, and the Halifax Explosion of 1917.

What you will see along the way:
From port, it is an approximately 60-minute drive to Peggy's Cove. Upon return, commence your hop-on/hop-off tour of Halifax. Known as the City of Trees, lovely Halifax boasts a modern harbor and significant international port. The historic Halifax Town Clock overlooks the downtown core, and the fortress of Citadel Hill, a National Historic Site, is a star attraction. The Historic Properties on Halifax's waterfront showcase restored Victorian-façade warehouses dating back to the late 1700s. Beautiful at any time of year, Halifax's surrounding scenery of windswept beaches and iconic eastern seaside vistas charm all who gaze upon her shores.

An 'Express Pass' will be included for the Citadel and the Maritime Museum to bypass any lines. Double-deckers operate every 15-30 minutes all day.

Tour duration varies from 2.5 to 4 hours depending on your own pace and length of stay at venues. This tour cannot store wheelchairs on the Double Decker. Map is given out to guests to show stops on the route.

Board your Double Decker bus from the pier for 1 X 30 minute & 1 X 60 minute tour loops at your leisure.

Inside visit:
Yes
Air conditioned:
No