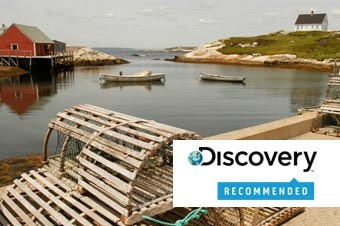 What you will visit:
Peggy's Cove Fishing Village
Dating back to 1811, charming Peggy's Cove Fishing Village takes its name from St. Margaret's Bay. This rural fishing village, set against a backdrop of colorful fishing boats and the Atlantic Ocean, displays its maritime heritage around every corner and pays homage with its granite-carved DeGarthe Monument, which pays tribute to the local fishermen. Stroll along the quaint streets studded with local arts and crafts shops, candy stores and cafes. Watch an optional live lobster demonstration and learn how this crustacean is the backbone of the local economy. You'll delight in the iconic red and white lighthouse guarding its rocky shores.

The Fairview Lawn Cemetery
The Titanic sank approximately 750 miles from Halifax and has had a significant influence on the city's history. Fairview Lawn Cemetery is where the bodies of 121 victims of the Titanic, which were recovered from the icy waters of the Atlantic, were laid to rest. A kilted tour guide shares stories of the victims, including the true identities of the unknown child and J. Dawson, who fans of the film believe was the inspiration for Leonardo DiCaprio's character. Most of the victims are memorialized with gray granite markers, and the graves are arranged in the shape of a ship's hull.

Citadel Hill
Visit the Citadel National Historic Site where you will be met and welcomed by a guide wearing the uniform of the 78th Highland Regiment of Foot. Be escorted inside the fort where you will receive a short guided historical tour and a behind-the-scenes visit to the Citadel's Quartermaster's Stores and modern tailor shop.

Halifax Public Garden
The oldest original Victorian gardens in the country has been open to the public since 1867. The 16-acre Halifax Public Garden is an urban oasis of manicured grounds. With 140 varieties of mature trees, colorful blooming flowers, wrought iron fences, and graceful water features that include a duck pond, a stroll through this natural and national treasure hearkens back to bygone days of refinement and tranquility.

What you will see along the way:
Explore the village and see the most famous lighthouse in all of Canada. Then, head back to town to see one of Canada's 'coolest' places to live. You'll pass by North America's oldest working brewery as well as Spring Garden Road Shopping District and Citadel Hill, one of Canada's most visited National Historic Sites.

Photo Opportunity:
Peggy's Cove Lighthouse
Perched high on a jagged outcrop of the eastern shore of St. Margaret's Bay, Peggy's Cove Lighthouse, built in 1915, is famed for its white-and-red design. One of the most photographed structures in Canada, it alerts sailors to the rough rocks that surround the cove. When photographing this iconic subject, make sure to say off the dark rocks, which may be wet and slick, and make sure you stay on the dry, white rocks.

Lunch:
Tuck into a traditional lunch of Nova Scotia's signature chowder served with homemade rolls, dessert, and coffee or tea.

Shopping:
Peggy's Cove is one of Nova Scotia's most popular tourist destinations, and there is an abundance of souvenir shops to be found in the village. Popular items are picture postcards, stained glass, pewter and kitschy lobster-themed gifts.

Acadian Maple Products
What began as a family hobby over 30 years ago has become a thriving business. As the largest purchaser and processor of pure maple syrup produced in Nova Scotia, Acadian Maple Products is renowned for its wonderfully high-quality products. Its maple syrups, as well as jams, sweets, cookies and more, are now found worldwide, and over 30,000 visitors enjoy shopping in the store and getting a 'taste of Canada' every year.

The drive from Halifax to Peggy's Cove takes approximately an hour. Wear sturdy walking shoes and bring a raincoat and umbrella in case of Atlantic mists. Don't forget your camera and plenty of film or memory. Tour sequence may vary due to hours of operation and schedules. Please note that on some voyages the duration of the tour will be based on the ship's time at port.

Return to the Pier with city highlights

Drive to the Lunch Venue