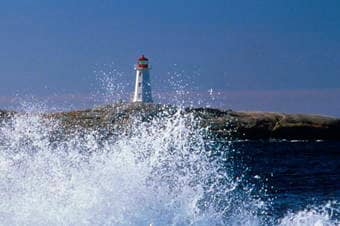 What you will visit:
Peggy's Cove Fishing Village
Dating back to 1811, charming Peggy's Cove Fishing Village takes its name from St. Margaret's Bay. Stroll along quaint streets studded with local arts and crafts shops, candy stores and cafes. Watch an optional live lobster demonstration and learn how this crustacean is the backbone of the local economy. You'll delight in the iconic red and white lighthouse guarding its rocky shores.

Maritime Museum of the Atlantic
Situated right in the heart of Halifax's historic waterfront, the Maritime Museum of the Atlantic celebrates Nova Scotia's seafaring heritage. Canada's oldest and largest maritime museum draws interest for its Titanic artifacts, including the ship's only surviving deck chair and an intricately carved door topper copied for the movie Titanic, and an exhibit detailing Halifax's response to the 1912 sinking.

Citadel Fortress and Army Museum Citadel Halifax
Delve into the significance of the 19th-century Halifax Citadel, a National Historic Site of Canada. This star-shaped fortress, completed in 1856, is actually the fourth fort to grace Citadel Hill. Learn the key role it played as Halifax's naval station throughout Canadian history and view its defensive ditch, earthen ramparts, musketry gallery, guardroom, and barracks. The Army Museum Citadel Halifax within the fortress has been showcasing the compelling story of Canadian military operations since 1953.

Halifax Public Garden
The oldest original Victorian gardens in the country has been open to the public since 1867. The 16-acre Halifax Public Garden is an urban oasis of manicured grounds. A stroll through this natural and national treasure hearkens back to bygone days of refinement and tranquility.

What you will see along the way:
Known as the City of Trees, lovely Halifax boasts a modern harbor and significant international port. The historic Halifax Town Clock overlooks then downtown core, and the fortress of Citadel Hill, a National Historic Site, is a star attraction. The Historic Properties on Halifax's waterfront showcase restored Victorian-façade warehouses dating back to the late 1700s. Beautiful at any time of year, Halifax's surrounding scenery of windswept beaches and iconic eastern seaside vistas charm all who gaze upon her shores.

Photo Opportunity:
Peggy's Cove Lighthouse
Perched high on a jagged outcrop of the eastern shore of St. Margaret's Bay, Peggy's Cove Lighthouse, built in 1915, is famed for its white-and-red design. One of the most photographed structures in Canada, it alerts sailors to the rough rocks that surround the cove. When photographing this iconic subject, make sure to say off the dark rocks, which may be wet and slick, and make sure you stay on the dry, white rocks.

Shopping:
Peggy's Cove is one of Nova Scotia's most popular tourist destinations, and there is an abundance of souvenir shops to be found in the village.

The drive from Halifax to Peggy's Cove is approximately an hour long. Wear sturdy walking shoes and bring a raincoat and umbrella in case of Atlantic mists. Don't forget your camera and plenty of film or memory. The timing of the sites visited may be altered to accommodate the amount of ships in port. Please note that on some voyages the duration of the tour will be based on the ship's time at port.

Depart pier and travel through the city to Peggy's Cove

Arrive at Peggy's Cove for leisure time to explore

Re-board your transportation to arrive back in the city

Tour of the Maritime Museum