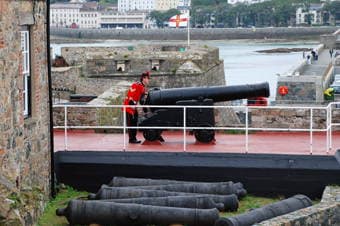 Enjoy a guided walking tour that takes you along the cobbled streets of historic St. Peter Port. Stroll along the waterfront as your guide regales you with tales of storms and shipwrecks, smugglers and privateers, and the deadly Black Plague that ravaged the island in the 14th century.

Explore the ancient Castle Cornet. Formerly a tidal island like Lihou on the west coast of Guernsey, Castle Cornet was first fortified between 1206 and 1256. In 1339, when a French force seized the island and occupied it for several years, Cornet was besieged and captured.

With the advent of cannons and gunpowder, the castle was remodeled to accommodate this new technology in weaponry. It served as official residence of the Governor of Guernsey until 1672 when a bolt of lightning struck the magazine of the castle, destroying the keep and a number of living quarters. During World War II, the castle became occupied by a small group of German troops. Finally, in 1945, Castle Cornet was presented to the people of Guernsey by the Crown.

Today, Castle Cornet houses the Maritime Museum, The 201 Squadron RAF Museum, and the Royal Guernsey Militia Museum. It also has a restaurant and hosts outdoor theatre performances during the summer months. After touring the castle and its museums, enjoy coffee or tea accompanied by gauche, afruit bread which is an island specialty.

Participation is very limited; book early to avoid disappointment. This tour normally sells out in advance of the cruise.

Depart from ship on a guided walking tour of St. Peter Port enroute to Castle Cornet for a guided tour

Walk back to your ship following your tour