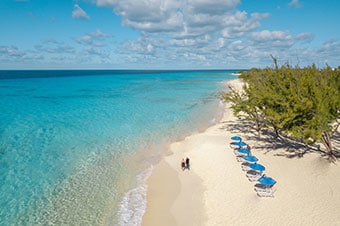 What you will visit
Cockburn Town
For almost 500 years, explorers, merchants and pirates have long favored Turks and Caicos for its turquoise waters, powder-soft beaches, and abundance of sun. Cockburn Town, also referred to as Grand Turk, is the capital city of the Turks and Caicos Islands and has served as the seat of government for the islands since 1766. Located on the west coast of Grand Turk Island, the town has an eclectic mix of architecture with older structures show casing influences from the British colonial Bermudian style, many of them renovated and restored.

Circle of Life
Found in the North Creek area, Circle of Life is a small, marine facility that houses touch tanks for an interactive experience with creatures of the sea. You can gently hold sea urchins, sea cucumbers, starfish, conch shells and much more.


Governor's Beach
Part of the Columbus Landfall National Park, Governor's Beach, situated on the island's west coast, is considered its most beautiful stretch of sand with low, rolling waves and a lush Casuarina tree grove for shade, which offers shade and shelter from the winds. Governor's Beach gets its name from the governor's mansion, which is just a short distance away from the main beach entrance.

What you will see along the way
Throughout your island drive, view several 18th-century churches; beautiful old Bermudian-style architecture; heritage churches and old cannons. See remnants of the island's salt-producing days and maybe even horses and donkeys freely roaming the streets. Historic highlights include the former U.S. Air Force Base and a reproduction of John Glenn's spaceship. Pass by the remnants of where the first slave to be set free in the Caribbean lived and take in the Bermuda Triangle, the northernmost part of the island and views of the iconic lighthouse.

Photo Opportunities
Grand Turk Lighthouse
Rising 60 feet high and made of cast iron, the lighthouse serves as a reminder of Grand Turk's storied past. Built in the United Kingdom and reassembled piece by piece on the island, the Grand Turk Lighthouse stands tall on its cliff top overlook, protecting ships for the northern reefs.

John Glenn Space Capsule
The first American to orbit the earth, John Glenn splashed into the waters off the coast of Grand Turk and relaxed on the island for several days after his historic flight. Drive by the former United States Air Force facility where the astronaut was debriefed in 1962 after his historic space flight and spy a replica of Glenn's Friendship 7 space capsule, a piece of American history.

Wear sunscreen, swimwear, beach shoes and towels to swim. Pregnant women, persons with neck or back injuries, those who have limited mobility as well as those with heart conditions and other ailments must notify the dispatcher and declare it on the waiver. All guests swim at their own risk. A shuttle is available every hour to take guests back to the Cruise Port.

Eunice Lodge where the Abolition of Slavery was read. Mary Prince's House

Bermuda Triangle to see the 21 000ft drop off point, the Old Herald (190 yrs old), the Light House from a distance and the secret Navy Base

Venture to the Circle of Life to see and touch live sea creatures such as conch, urchins, star fishes, jelly fishes and sea cucumbers

Governor's Beach stop & Beach Getaway where you swim and play at your leisure.