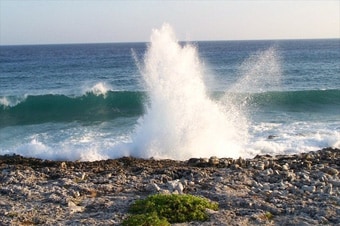 WHAT YOU VISIT
- Hell
No one knows how the town got its name, but it could be from the various limestone formations rising out of the ground. Short spikes of eerie-looking black rocks look like lava in the aftermath of a volcano. Be sure to stop by the fire-engine red, hell-themed post office so you can send everyone back home a "postcard from Hell."

- Tortuga Rum Cake Center
Made with a unique blend of Jamaican and Barbadian rums, these award-winning cakes offer an authentic taste of the Caribbean. A tour of the state-of-the-art facility showcases how they create up to 6,000 cakes per day! Enjoy a tasty sample or two at the end of the tour.

- The Blow Holes
Tucked on the island's south shore, the Blow Holes is a phenomenon courtesy of Mother Nature. Watch as crashing waves force water into the caverns that sit just below the surface.

- Wreck of the Ten Sails
At the east end of Grand Cayman on a cliff overlooking the reef sits a stone monument and plaque commemorating the night ten ships bound for the United States and Britain wrecked on the surrounding reef. Perched along the cliff adjacent to the monument are six small concrete blocks representing the men the Caymanians were unable to rescue.

- Rum Point
Named for the remnants of rum barrels once washed ashore from floundering ships, this picturesque beach on Grand Cayman's north side offers soft, white sand, swaying palm trees and time to dip your toes in the Caribbean's turquoise waters.

- Old Guard House in Bodden Town
Once called "South Side," Bodden Town was the first capital of Grand Cayman in the 1700s. The guardhouse protected the western approach to town, with its cannons pointed down a rocky gorge toward the sea. The two cannons that stand here today are from the ships involved in Cayman's most famous disaster, the Wreck of the Ten Sails.

PHOTO OPPORTUNITY
You may get a little wet trying to get that perfect shot of the Blow Holes. When the water arrives full force, it collides with the air, forcing it out, resulting in geysers that can shoot up to 15 feet high.

SHOPPING
Take home a taste of the tropics with a visit to the gift shop at the Tortuga Rum Cake Center gift shop. Here, you'll find many varieties of freshly baked rum cakes, including chocolate, coconut, banana and coffee.

WHAT YOU SEE ALONG THE WAY
From sun-kissed beaches to the handsome waterfront of George Town, there are so many sights to see as you travel around the island. From the ship you'll journey north to Hell, then follow a route back south to the Tortuga Rum Cake Center. From here, you'll head east to the Blow Holes and continue north to the Wreck of the Ten Sails and Rum Point. On your way back to your ship, you'll travel inland to Bodden Town, which sits near George Town.

There are some uneven surfaces. Wear comfortable walking shoes. Ordering food at Rum Point is at the guest's expense. Please note that some food order may take some time to prepare and be served.

Stop for visit at small town of Hell

Stop for photo op at Wreck of the Ten Sails