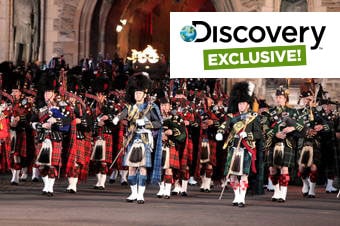 Your amazing evening excursion to see the Royal Edinburgh Military Tattoo begins at the pier. Board your motorcoach for a comfortable and scenic guided two-and-a-half drive through the ruggedly beautiful Scottish landscape en route to Edinburgh. Located between the Highlands and Lowlands, this capital of Scotland boasts a dramatic skyline, classical architecture and over 1,000 years of Scottish history.

Avoiding the entrance queues, your motorcoach will join the salute takers' convoy, travel uphill onto the castle esplanade to Edinburgh Castle. This majestic castle is a superb fortress complex that has dominated the city from its rocky mount for over a millennium and was the seat (and regular refuge) of Scottish Kings.

Take a brief walk to the exclusive VIP seating area, where you can take your place in your comfortable reserved seats where a complimentary programme and luxury gift bag are provided. Join thousands of spectators gathered to experience the amazing spectacle that is The Royal Edinburgh Military Tattoo. Scotland's biggest, best-selling spectacle, this is the most popular annual event on the Scottish calendar, attracting an international audience each year of some 217,000 people. The word 'tattoo' comes from the closing-time cry in the inns in the Low Countries during the 17th and 18th centuries - 'Doe den tap toe' ('Turn off the taps').

As night begins to fall, footlights transform the castle into a dazzling stage set for one of the world's most spectacular shows. Seated in the spot where ancient clans once gathered, you will enjoy a breathtaking 1.5-hour performance that features military precision drills with massed bands, bagpipes, and drums, all representing various international Scottish Regiments. This rich pageant is ever-changing and continuous, with traditional Scottish dancing, and enactments of historical events.

International guest performers are also included and bring another dimension to this stunning pageant. During the 60-year history of the Tattoo, performers from more than 40 countries - from Australia to Canada, Africa to Fiji, France to Nepal, The Netherlands to the United States - have participated.

But it is the pipes and drums, which serve as the emotional core and the heart of the Tattoo which Scots love fiercely and visitors quickly take to their own hearts.

The finale includes a magnificent fireworks display and the most moving of all Scotland's performances - a lone piper, floodlit on the castle battlements, his haunting music reaching out across the historic setting and into your memory forever.

After the show, you are invited to join the Producer of the Royal Edinburgh Military Tattoo for a Pommery champagne and canapé reception in the VIP Suite. Following the reception, return to your awaiting motorcoach for the return journey to Greenock.

This tour has a very limited availability. Princess purchases the maximum number of tickets permitted by the Tattoo for any single performance. Tickets for this tour are allocated approximately seven months prior to the call. Until this date, all reservations are considered tentative pending the final confirmation. The number of tickets available is limited; please waitlist everyone in your party as early as possible for the best chance of confirmation.

Please note the dress code for all Royal Gallery packages is Formal. The Royal Gallery seats 148 guests and this can (but may not always) include politicians, high ranking military officials and even Royalty from the UK and overseas, as well as those who are enjoying corporate entertainment or special occasions. Denim and sports shoes are not permitted in The Royal Gallery. Guests are advised to dress as if for an onboard formal night. As The Royal Gallery is open to the front, it can become colder when the sun goes down and we recommend you bring a warm coat.

Once onboard, tickets are nonrefundable as they have been confirmed and purchased for the event.

The drive from Greenock to Edinburgh is approximately 2.5 hours each way. A restroom stop will be made en route.

Depart from ship for the Edinbugh Military Tattoo ceremony and performance