Edinburgh on Your Own 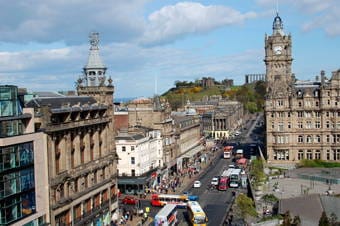 Set forth on a full-day, moderately active excursion to discover the best of Edinburgh by boarding a motorcoach at your pier. Then sit back, relax and enjoy a scenic two-hour drive across the Scottish landscape to the beautiful city of Edinburgh.

Perched between the Highlands and Lowlands, this capital of Scotland boasts a dramatic skyline, classical architecture and over 1,000 years of Scottish history.

Your motorcoach takes you to Edinburgh's city center, where you will disembark at Waterloo Place, a central point for shopping and sightseeing. City maps will be provided to you as you head out for approximately four to five hours of exploration on your own!

Or choose to tour the magnificent Edinburgh Castle perched at the top of the Royal Mile. This majestic castle is a superb fortress complex that has dominated the city from its rocky mount for over a millennium and was the seat (and regular refuge) of Scottish Kings. Peruse the Great Hall commissioned by King James IV and completed in 1511 to be the main hall for state assembly at the castle. Marvel at the magnificence of the Scottish Crown Jewels, dating from the fifteenth and sixteenth centuries.

Visit the historic Holyrood Palace, founded in 1128. Once home to Mary Queen of Scots, it is now the setting for State ceremonies and the official home of the Queen when she visits Scotland.

Head to the harbour at nearby Leith for a fascinating tour of the Royal Yacht Britannia, one of the world's most famous ships. Launched in 1953, the Royal Yacht proudly served Queen and country for 44 years. During that time Britannia carried The Queen and the Royal Family on 968 official voyages, from the remotest regions of the South Seas to the deepest divides of Antarctica.

Be sure to take time to enjoy a delicious traditional lunch at one of the city's many delightful restaurants and pubs. Fish 'n' Chips, anyone?

At the close of your amazing and educational independent exploration of Edinburgh, you will rejoin your motorcoach at Waterloo Place for your return journey to Greenock and your Princess ship in the harbour.

The drive from Greenock to Edinburgh is approximately two hours each way.

This tour will not operate on all visits.
Please expect lines and random bag checks at the entrance of the castle for security purposes.

Depart from ship for free time in Edinburgh