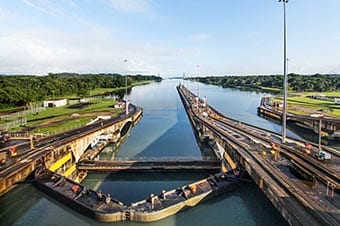 What you visit:
Casco Antiguo/ Casco Viejo:
Latin America's most beautiful Spanish Colonial City is also known as Casco Viejo (Spanish for Old Quarter) and is the oldest European settlement on the Pacific Ocean. This vibrant historic district and UNESCO World Heritage Site showcases a fascinating mix of architectural styles, each telling the tales of the country's storied past. Its massive sea wall was built in the 1670s to protect the city from pirate attacks. The beautiful Spanish and French city is ribboned with cobblestone streets lined with colorful art deco facades and studded with bohemian cafes, historic landmarks, graceful plazas and a bold mix of restored buildings side by side with ramshackle houses.

Miraflores Locks Observation Center:
The Miraflores Locks are part of the engineering marvel that makes up the Panama Canal. The lock gates at Miraflores are the tallest of the three due to the extreme tidal variation that takes place in the Pacific Ocean. Depending on the size of each vessel, you can see anywhere from one to three vessels make the transit simultaneously. From the minute a vessel enters the locks, it takes approximately 10 minutes for the process to be completed. The water enters and leaves the locks by means of gravity only, as there are no pumps or other man-made devices that assist in this fascinating process. In addition to observing transiting vessels, learn more about the operations of the Panama Canal, the history of its construction, and its influence on the global economy.

What you see along the way:
Against the backdrop of Panama Bay, Casco Antiguo, a neighborhood more than 300-years old, provides an opportunity to see contemporary local color and buildings of historical significance. See 19th century Plaza Santa Ana, a lush park church, and the magnificent Moorish style Presidential Palace, the official presidential residence originally constructed by the Spanish in the 17th century. Teatro Nacional, or the National Theater of Panama, first opened in 1908 and was constructed on the site of an 18th century monastery. And Bolívar Park pays tribute to one of the most significant figures in Latin American history, Simón Bolívar.
Shopping:
An extra 30 minutes of free time will be provided for independent exploration of Casco Antiguo. Street peddlers and souvenir shops sell Panamanian favorites such as Panama hats and Kuna Indian molas, which are intricately embroidered fabrics. High-quality jewelry can be found as well as locally produced handicrafts.

Ship sightings at the Miraflores Locks Observation Center are not guaranteed. At Plaza Quinto Centenario there are approximately 12 steps; a ramp is also available. Walking at Casco Antiguo is on cobblestone. Some waiting time could be expected. Tour sequence may vary. The Panama Canal Authority assigns specific time slots for the transit of a vessel through the locks. The ship will anchor in a designated area and will wait for instructions. Once clearance is transmitted to the ship, procedures begin to bring ship's tour passengers ashore. Therefore, tour departure times may vary and will be announced onboard.

Transfer to the pier