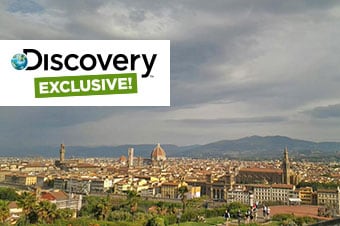 Uffizi Museum and Gallery
As one of the oldest and most famous museums of the Western world, Uffizi Museum and Gallery is rivaled only by the Louvre in its collection of Renaissance masterworks. Originally, it was built to serve as administrative offices, but it now displays such notable works as Leonardo da Vinci's The Annunciation, Sandro Botticelli's The Birth of Venus and Rembrandt's self-portraits, to name just a few.

This tour will not operate on Mondays as the Accademia and Uffizi are closed.

This excursion is non-refundable and may not be exchanged once onboard ship. The tour may operate in reverse order.

The drive between Livorno and Florence is approximately 1.5 hours each way, subject to traffic conditions.

All sightseeing will be on foot, as motorcoaches are not allowed in the main center of Florence. Most of the sights are seen from the outside only. You may encounter considerable crowds and delays during peak season. This tour involves extensive walking over uneven surfaces. Not recommended for passengers in wheelchairs or with limited mobility.

Please be aware that ongoing restoration work is often being carried out at the various venues.

Depart from ship for a guided tour of the Accademia

Inside visit of the Uffizi museum and gallery

Gourmet lunch at a luxury venue in the Tuscan countryside