Livorno on Foot & by Boat 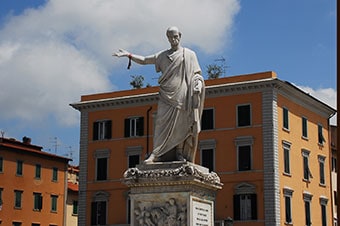 Livorno (walking tour)
Founded by the Medici family in 1577. Unlike the gradual growth of other Tuscan towns, Livorno was designed by the renowned Italian architect Bernardo Buontalenti. When he was tasked with creating a model, modern city that would serve as a blueprint for others around the world, he created this pentagon-shaped city, fortified by canals-a virtually impenetrable design. Livorno was significantly damaged during WWII, so you won't find the amount of ornate architecture typical in other Tuscan cities. But you'll still want to keep your camera at the ready!

Canal Cruise
Next, board a canal boat to see the sights from a different vantage point. Livorno's Venezia Nuova, or New Venice, district links-by a network of canals-Fortezza Vecchia on the waterfront and Fortezza Nuova, built in the 16th century. In the 1620s, Livorno's population was expanding, and plans were to create a new district between the two fortresses. But there were so many canals and waterways that were vital to moving goods that the architect, Buontalenti, opted to model it after Venice, hence the name "New Venice."

Your walking tour commences with a stroll down Via Grande, a vibrant mix of local activity. Cross the Piazza Grande, where you'll find the 17th century Saint Francis Cathedral, built between 1594 and 1606 and rebuilt in 1943, preserving its 16th and 17th century frescos. Traverse the Piazza della Repubblica, decorated with statues of Ferdinand III and Leopold II, the last dukes of Tuscany. In Piazza Micheli, find the dramatic monument of the Four Moors. Fortezza Vecchia, one of the few buildings in Livorno to survive World War II bombings is a 16th century pentagonal fortress at the north end of the port.

Shopping:
Upon arrival at the 19th century Central Market, originally called Provisions Market, stop in to browse its colorful stalls. It is considered one of the most beautiful indoor markets in all of Europe.

Snack:
At the conclusion of the walking tour, pause at a typical café, where you'll refresh with a soft drink or a foamy cappuccino.

The boat is open so tour might be cancelled due to unfavorable weather of canal conditions.
Use of an audio headset (included) will enhance your tour experience.

Board a local boat for a scenic ride along the canals

Disembark in the "Venice Quarter" and enjoy a complimentary refreshment

Walk to the shuttle bus pick-up point, reboard motorcoach for drive back to ship