Best of Florence & Pisa for Families 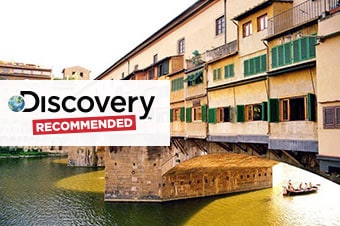 Piazza Duomo Cathedral
Representing the wealth and power of the era, the Duomo, or "The Dome" took 14 years to build using a revolutionary method that was later copied for St. Peter's in Rome and St. Paul's in London. The fourth largest church in the world, the Duomo was consecrated in 1436. Fillipo Brunelleschi, master architect of the Italian Renaissance, designed the cathedral's green and white marble façade and magnificent dome. The Baptistery displays magnificent doors featuring scenes from the Bible sculpted on a series of bronze panels. The doors on the east side were dubbed by Michelangelo as the "Gates of Paradise."

Piazza Della Signoria
The political heart of the city from the Middle Ages to the present day, this square, which sits in front of the Palazza Vecchio, or the "Old Palace" is in effect an open-air museum. Copies of some of the world's most renowned statues hold court in the Piazza Della Signoria, including Michelangelo's David. The statue came to symbolize the defense of civil liberties embodied in the Florentine Republic.

Galleria dell'Accademia (Academy of Fine Arts)
One look at the crowd at the Accademia and you'll know there's something extremely special inside. What was once the world's first art school is now the home of one the greatest sculptures of all time - David by Michelangelo. While you'll see a replica of the statue in the Piazza della Signoia, the original is truly breathtaking. Sculpted between 1501 and 1504, it stands over 13 feet tall, and is spectacular in its the detail. Admiring the many works of Michelangelo, and other Renaissance masters during a one-hour vist.

Use of an audio headset (included) will enhance your tour experience.
Please note: This tour is very popular and typically sells out. Alternative tours with similar content may be available, including LI1-605 Discovery Family - Pisa.

Guided tour of the Accademia

Free time in Pisa around the Leaning Tower