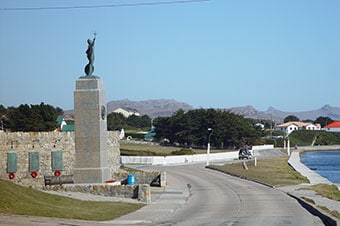 Enjoy a leisurely drive through Stanley, the capital city of the Falkland Islands. If this is your first visit, then this tour's for you. Although the town is small with a population of around 2,000, it's big on local history. Situated on the isle of East Falkland, Stanley was settled in 1845 by former members of the British Army. The settlement served as a way station for ships, particularly whalers, traveling through the Straits of Magellan.

After transferring to shore via the ship's tender, you'll board the transportation and set out on a two-hour sightseeing tour of Stanley's most colorful and historical sights. As you make your way through this charming and peaceful town, you'll pass a scattering of colorful houses and picturesque farms tucked along the rolling verdant hills that border Stanley Harbor. You'll continue past Christ Church Cathedral, the southernmost Anglican cathedral in the world. Built in 1892, its large stone and brick construction and brightly painted corrugated iron roof is one of the city's most recognizable landmarks. In fact, the Cathedral is so iconic it's featured on the country's currency. Another famous attraction is the Whalebone Arch, which sits adjacent to the Cathedral. Constructed in 1933 to commemorate a century of continuous British rule, the Arch is made from the jaws of two blue whales.

Other sights you'll pass include the Government House. Built in 1845, it's the official residence of the Islands' London-appointed governors since the mid-19th century. Nearby is the Liberation Monument, which pays tribute to the British forces and civilians who lost their lives during the 1982 Falklands War and the Battle Memorial, which commemorates a battle between British and German fleets in 1914.

Your return journey to port will take you past the Stanley Airport and Stanley Harbor, the world's largest graveyard of 19th century ships. Along the seven-mile harbor front you can see the hulls of 20 ships that were destroyed by the North Atlantic's treacherous storms. Many birds such as rock cormorants happily perch on the wreckage of these old ships. At the east end of the harbor lays the Lady Elizabeth. Built in England in 1869, the 228-foot vessel made a number of visits to the Falklands and in 1913 hit a rock and was declared unseaworthy.

At the completion of your city drive, you will be given the option of a drop off at the newly completed Historic Dockyard & Museum. Located on the waters edge directly from the Liberation Monument, this new complex holds an impressive collection of historic and maritime relics and interactive exhibits including the Falklands' contributions to both World Wars and how lives were affected during the 1982 war. Located just a five-minute walk from the pier, you will make your own way back to the pier after spending as much as you like at this venue.

Heading back to your ship look for black face ground tyrants, two banded plovers, dotterels, meadowlarks and other small birds along the water's edge.

Depart from ship on a narrated city drive

Drop at Historic Dockyard Museum and return to ship at your leisure (5-minute walk) or return directly to port.