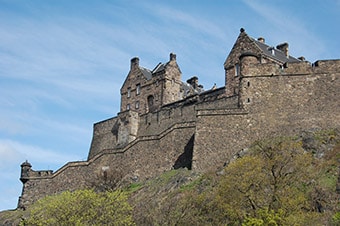 Board your motorcoach and enjoy a lovely, scenic drive to Edinburgh. Alive with culture and history, the capital of Scotland is a thriving UNESCO World Heritage Site. As you tour the streets, marvel at the juxtaposition of medieval architecture and contemporary buildings. The lively culture and classic beauty of this city is on display around every corner.

Your walking tour of the Royal Mile, Edinburgh's oldest and most historical street, will take you from the Edinburgh Castle Esplanade to Holyrood Palace. You'll want to have your camera ready as the medieval buildings, statues and monuments that line both sides of the street make for dramatic photographs. As you stroll, a knowledgeable guide will impart information and facts about the area's fascinating past.

Begin at the Edinburgh Castle Esplanade, the city's dominant landmark. This 12th-century castle sits atop a rocky, extinct volcanic perch, affording magnificent views of the city. Additional panoramic views will be captured from Castle Hill, which has a unique collection of ruins on its grounds.

The charming Lady Stair's House, also constructed in the 17th century, was once a home but now houses a literary museum devoted to the works of Robert Burns, Sir Walter Scott and Robert Louis Stevenson.

You'll recognize the magnificent St. Giles Cathedral, occupying this site since the 9th century, by its towering and impressive spires and its magnificent stain-glass windows.

Historic Parliament Square, home to the Parliament Building and today's Scotland's courts, is largely unchanged since the 16th century. Here, an equestrian statue of Charles II stands boldly in the middle of the square, one of the oldest lead statues in Great Britain.

Meander through the elegant district of Cannongate with its quaint Tollbooth, now a museum which details life in 18th century Edinburgh. The design on this building has a delightful series of small, delicate turrets.

Standing proudly at the end of Royal Mile is the magnificent Holyrood Palace, the official residence of Her Majesty the Queen while in Scotland. This ornate, baroque palace is famously known as the home of Mary Queen of Scots and within its walls many dramatic episodes of her turbulent reign unfolded.

Your tour includes an opportunity to step inside these hallowed halls for a tour of the royal residence. See the state apartments and their unrivaled collection of tapestries, paintings and antique furniture. Look up and note the fine plasterwork and intricate design on many of the ceilings and be sure to browse the royal gallery featuring exquisitely painted portraits of Scotland's rulers.

At the completion of your tour, the motorcoach will bring you back to port. If you wish to remain in Edinburgh for independent sightseeing, you are then responsible for your own transportation to the ship.

Photography is not permitted inside Holyrood Palace.

Depart from ship for a guided walking tour of Edinburgh past Edinburgh Castle, Lady Stair's House, and St. Giles Cathedral