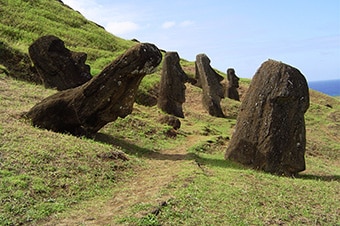 What secrets do these gigantic volcanic statues hold? Maybe you can unlock their mysteries during this three hour guided tour of some of the most iconic spots on earth. This tour's a photographer's dream so remember to bring along a camera or recorder to capture every memorable moment of this exciting adventure.

After leaving the pier, it's just a short journey to your first photo stop, Ahu Tahai, a small moai complex just north of the capital city of Hanga Roa. Believed to be constructed around 690 A.D., the five serene statues standing at Ahu Tahai are all very different from each other in scale and shape. Yet they each stand in a straight row perched atop ahu, or stone altars, all with their backs to the sea. Here is where you'll find the renowned Ko Te Riku, the moai with the mesmerizing black and white eyes and topknot called a pukao on its head. Like many of the statues you'll see as you explore the island, the moai of Ahu Tahai were knocked over during the tribal conflicts during the 18th century but restored in the 1960s by archaeologist William Mulloy, whose gravesite rests nearby. Further along is the site known as Vaihu. Not only will you see a number of toppled moai but the ruins of a platform, as well.

Your next stop is the fascinating Rano Raraku crater, where most of the island's 900 moai were quarried. Located in Rapa Nui National Park, Rano Raraku has been designated a UNESCO World Heritage Site. Once you step off the bus you'll find an otherworldly landscape filled with over 390 statues lying or half buried in the slopes of an extinct volcano. 400 to 600 years ago, craftsmen carved these immense monoliths from remnants of the volcanic rock. Centuries of erosion have nearly covered many of these stone giants but experts believe that their bodies extend 20 to 40 feet underground. On average, moai stand 13 feet high but here you'll find the largest moai on the island: "El Gigante" measures over 71 feet high. Keep your camera handy for one of the more haunting moai…the "kneeling" statue. Located apart from the others, this is the only moai that doesn't stand upright.

Facing Rano Raraku is Ahu Tongariki, site of the largest ahu on the island. Set against the stark beauty of dramatic sea cliffs and sparkling ocean water sits 15 moai. A tidal wave in 1960 forced the moai - many weighing up to 80 tons - several hundred feet inland. Today, they are standing on their platform again with their backs turned away from the ocean, these massive monoliths greet the sunset every year during the summer solstice.

After all your photographs have been taken, you'll step back aboard your bus and share your Easter Island experience with your fellow passengers and take back with you cherished memories.

A $80 National Park entrance fee is included in the cost of the tour.

Participants must hike over uneven terrain.

Vehicles are not air conditioned. Guides provide narration during site visits only. No narration is provided during travel time.

Depart from ship for a visit to Ahu Tahai

Re-board your vehicle and return to your ship