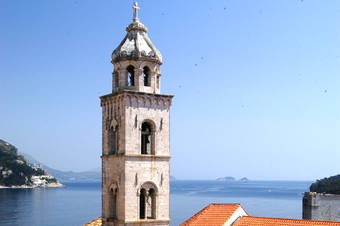 Marvel at the panoramic views during your motorcoach ride to the city of Dubrovnik, the "Pearl of the Adriatic" and one of the most beautiful Mediterranean ports. It is a city rich in history and culture. After a brief stop for photos, you'll arrive at the UNESCO World Heritage Site of the Old Town, and the beginning of your two-hour guided walking tour.

Dubrovnik dates back over a thousand years. It was known as the Republic of Ragusa before it was overthrown by Napoleon in 1808. As you approach the old city, you'll notice the stone ramparts that encircle it. These city walls were built in the 13th century to protect this port, which once rivaled Venice in importance.

Your first stop is the Franciscan Monastery and Old Pharmacy. Inside you can explore the stunning Romanesque and Gothic cloisters and feel the peacefulness of life as a Franciscan monk. The monastery library, one of the finest in all of Europe, boasts 30,000 volumes, 22 incunabula, and 1,500 valuable handwritten documents. The fascinating Old Pharmacy attached to the monastery opened in 1317 and is Europe's third oldest apothecary, and the only one still operating. You'll be intrigued by the display of the ancient laboratory equipment and old medical books in the Franciscan Monastery Museum.

From here, follow your guide to the Dominican Monastery. At first glance, it may look more like a fortress. Its 13th-century construction reflects rich Ragusa's concern for security in an unstable political environment. The church's star attraction is the large painted Gothic crucifix by Paolo Veneziano; however, you'll find many works of the old masters dating from the 14th to 20th centuries.

Your next stop is the spectacular Baroque Cathedral of the Assumption of the Virgin Mary and its Treasury. The current building dates back to the 18th century; however, it's the third church built on that site. The first one is said to date back to the 5th century and was built with money donated by Richard the Lionheart, who survived shipwreck on his way home from the Third Crusade. The not-to-be missed treasury hosts an opulent collection of gold and silver artifacts, including the gold-plated and jewel-encrusted relics of St. Blaise and a late-Gothic silver cross enclosing part of the "true cross."

After a very busy morning, it's time for a break and a little folklore. You'll follow your guide to the Lazareti Quarantine complex, made up of 15thcentury buildings that once held quarantined travelers and now host an arts center for the city. Enjoy a colorful performance and some refreshments before exploring on your own. You'll have an hour of free time for photos, shopping and more before it's time to return to your motorcoach and your ship.

Passengers are required to carry a government issued photo I.D. with them when going ashore. The tour may operate in reverse order,or the order of the sites visited may vary. Photography is not permitted inside any of the venues. There are approximately 20 steps to negotiate in order to participate in the folkloric performance. Use of an audio headset (included) will enhance your tour experience.

Depart from ship for a photo stop of Dubrovnik's Riviera