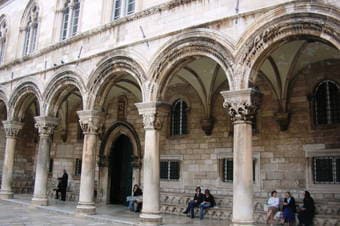 Dubrovnik, Old Town (walking tour)
Gothic, Renaissance and baroque fountains, monasteries and museums can be found in Dubrovnik's pedestrian-friendly Old Town, surrounded by ancient city walls. This UNESCO World Heritage Site begins at 12th-century Pile Gate, one of three entry points into the city. Often referred to as the Croatian Athens, Dubrovnik's history can be traced in such Byzantine and Gothic architecture as Onofrio Fountain and Sponza Palace. Chimes ring from the 14th-century bell tower, and the city's widest street, Stradun, has also become its most fashionable.
Cavtat:
The southernmost town in Croatia, Cavtat, pronounced 'tsavtat,' is a petite seaside enclave, nestled between two peninsulas on an emerald bay and surrounded by lush foliage and sandy beaches. One of the oldest cities in the Adriatic, Cavtat now boasts trendy restaurants and boutiques as well as such historic sites as the ruins of an amphitheater, Roman tombs, 16th-century structures, and the grand Renaissance Rector's Palace.
Dominican Monastery:

This stunning Romanesque and Gothic cloister exudes the peacefulness of life as a Dominican monk. The monastery library, one of the finest in all of Europe, boasts 30,000 volumes, 22 incunabula, and 1,500 valuable handwritten documents. The fascinating Old Pharmacy attached to the monastery opened in 1317 and is Europe's third-oldest apothecary and the only one still operating.
What you will see along the way:
Begin with a panoramic drive high above the Old Town of Dubrovnik for stunning views, then continue along the breathtaking eastern part of the Dubrovnik Riviera as you wind our way through the Zupa Valley and a series of tiny resort towns to your destination, lovely Cavtat.
Photo Opportunity:
Pile Gate
Part of Fortress Bokar, Pile Gate is one of the oldest encasements in Europe. Built in the 15th century, Pile Gate was, and still is, the traditional entrance to the Old Town. The two Gothic arches link the stone bridge with the old wooden drawbridge. Continue looking up and you'll see the statue of St. Blaise, the city's patron saint, greeting visitors in the entrance's arch.
Lunch:
A delightful country lunch is served in a traditional home as two local musicians perform for you international and local songs. A sample menu includes: roasted veal with potatoes and vegetables, salad and dessert. One beverage of choice per person: beer, wine and sodas.
Shopping:
Cavtat's promenade is lined with small shops and is the perfect place to shop for souvenirs and gifts.

Passengers are required to carry a government issued photo I.D. with them when going ashore. The tour may operate in reverse order,or the order of the sites visited may vary. Photography is not permitted inside any of the venues.Use of an audio headset (included) will enhance your tour experience.

Scenic drive and lunch at a leading local restaurant

A visit to Cavat