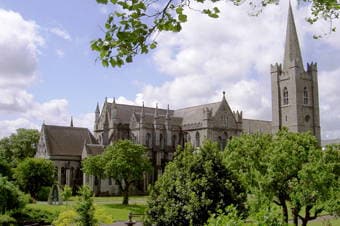 Dublin
Dublin, a thriving city steeped in tradition is the capital of the Irish Republic. In addition to its splendid public buildings, it is rich in the domestic architecture of the 18th century as well as historic Georgian mansions, lending beauty to the city's wide streets and spacious squares.

Trinity College (exterior views on your own)
Founded in 1592 by Queen Elizabeth 1, Ireland's oldest university is the alma mater of distinguished alumni, including Jonathan Swift of Gulliver's Travels fame, Oscar Wilde and Nobel Prize winner Samuel Beckett. The historic, cobblestoned campus with a collegiate atmosphere is located in the heart of Dublin's city center.
St. Patrick's Cathedral
Built in honor of Ireland's patron saint in 1190, St. Patrick's Cathedral is not only the largest church in Ireland but is also said to be one of the earliest Christian sites in Ireland where St. Patrick baptized converts. The cathedral was damaged during Cromwell's invasion of Ireland in the 17th century and was restored in the 19th century by the Guinness Brewery family.

What you will see along the way:
Your scenic drive allows you to take in the city's major sights, such as St. Stephen's Green, O'Connell Street, the River Liffey (the main river in Dublin), and the city's Georgian district, including Merrion Square. You will also pass the Custom House and view its elegant 18th-century Georgian architecture.

THIS TOUR IS NOT AVAILABLE TO PASSENGERS EMBARKING OR DISEMBARKING IN DUBLIN.
Traffic and delays may be encountered during the drive to the city sights.

The independent visit to Trinity College does not include admission to see the Book of Kells.

Continue your narrated city drive enroute to your ship