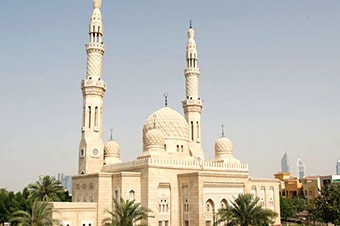 There are so many breathtaking sights to see in Dubai, it would be a shame to leave port without viewing some of its most amazing manmade wonders. And this half-day city tour is perfect for passengers who are curious to learn more about this incredible city but don't want to walk long distances, or spend an entire day away from the ship.

Your narrated drive starts at Port Rashid, where you will be warmly welcomed by your guide and driver before heading to the magnificent Burj Al Arab Hotel. This 321 meter building is famous for its sail-shaped tower and has often been described as the world's only "seven-star" hotel. It is the tallest all-suite hotel built over water, and the second tallest building in Dubai. After taking photographs you will then drive across the city to view the Jumeirah Mosque, a superb example of Middle Eastern architecture, and one of the most photographed sites in Dubai. It is one of the few mosques in the United Arab Emirates that is open to non-Muslims, and features a baroque towers, minarets and an impressive dome.

Continuing your drive through Jumeirah, you will be able to view its long, sandy beach which is bordered by palm trees. Your next stop is the ancient Al Bastakiya quarter, which is located near the eastern waterfront, and is famous for its historic Arabian architecture and wind towers.

The tour continues for a phot stop outside Sheikh Saeed Al-Maktoum's House, which was built in 1896 from coral covered in lime and sand plaster. Sheikh Al-Maktoum was the ruler of Dubai from 1912 until his death in 1958, and his house was restored over two decades ago. It is now home to old photographs, coins, stamps and a collection of historic documents. During the course of this laid-back excursion you will have the opportunity to use your bargaining skills at the bustling Gold Souk.

This souk is one of the world's major gold markets, and you should feel free to haggle for a bargain. With more than 300 traders, selling everything from gold bars to rings and necklaces, you will no doubt head back to the ship with a bag full of golden goodies.

This tour is not available to passengers beginning or ending their voyage in Dubai.

Modest attire is required to visit most sites.

Passengers must walk approximately 650 feet from the car park to the Gold Souk. Outside photo stops only for the Sheikh Saeed Al-Maktoum's House and Jumeirah Mosque.

Visit to the Gold Souk