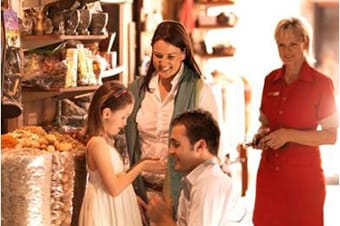 Dubai, one of the seven Emirates, is located south of the Persian Gulf on the Arabian peninsula, and early settlements go back to the early 18th century. This charming tour will whisk you back in time to some of the oldest, and most breathtaking, landmarks in the world, before bringing you right up to date with a look at some of the city's incredible modern architecture.

Your action-packed, half-day excursion starts at the pier, where you will meet your guide and driver before heading to your first photo opportunity of the day, the Burj Al Arab Hotel, in the Jumeirah district.

Opulence, luxury and breath-taking beauty combine to make this five-star deluxe, 321 meter high hotel, a true jewel in Dubai's crown. Built in the shape of a towering sail, this magnificent structure is the tallest hotel in the world that stands over water, measuring just over a 1,000 feet high.

You will have the opportunity to take plenty of photos before heading to your next stop of the day, the awe-inspiring Jumeirah Mosque. This religious center is one of the most photographed sites in Dubai, and a splendid example of Middle Eastern architecture. It is one of the few mosques in the Emirates that is open to non-Muslims, and features baroque towers, minarets and an impressive dome.

From here your tour continues with a stop at the Dubai Museum, which is located in the Al Fahidi Fort (built in 1787), the oldest existing building in the city. The museum, which opened in 1971, features artifacts from Dubai's pearl fishing days, and archaeological finds from around the UAE that date back as far as 3,000 B.C.

Your tour then takes you to the historic Al Bastakiya district near the waterfront, where you will drive / walk ( dependant on weather conditions) along the winding, narrow lanes, viewing the tall wind-towers and Arabian architecture.

From here, you will head to the jetty where you will trade your motorcoach for a fun water taxi which will take you across the creek to Deira, allowing you to enjoy views of the city from a different angle.

Once on dry land again, you will enter the crowded magical world of the Gold Souk, which is located in the heart of Dubai's commercial district and is one of the world's major gold markets. The Souk consists of over 300 retailers, who trade almost exclusively in jewelry. From gold bars to bangles to necklaces, you will have the chance to haggle for gifts. After an hour exploring this dazzling market, including a stroll through the Spice Souk, you will climb back onto your motorcoach for the scenic journey back to Port Rashid.

This tour is not available to passengers beginning or ending their voyage in Dubai.

Modest attire is required to visit most sites.

Passengers must walk approximately 650 feet from the Gold Souk to the motorcoach park. Outside photo stops only for the Burj Al Arab Hotel and Jumeirah Mosque.

Inside visit of the Dubai Museum

Water Taxi ride across the Deira