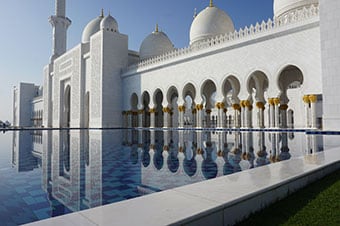 Sheikh Zayed Grand Mosque
Grand Mosque is one of the city's most breathtaking landmarks. The Sheikh Zayed Mosque is named after its founder, Sheikh Zayed bin Sultan Al Nayhan, and features Moorish architecture boasting classic Arab minarets and 82 domes. Like everything else in Abu Dhabi, it is built on a grand scale. One the world's largest mosques, with a capacity for 40,000 worshippers, it has a carpet that measures a record-breaking 60,000 square feet, enormous 24-carat-gold chandeliers, and over 1,000 columns adorning the interior.

Heritage Village
Situated in the middle of Abu Dhabi, Heritage Village was designed to give insight into the lifestyle and traditions of the Bedouin. View mud-brick houses, stroll around a traditional marketplace and watch artisans blowing glass, making ceramics and weaving fabric on large looms.

Louvre Abu Dhabi
Behold the magnificence of the Louvre Abu Dhabi, an art and civilization museum established in 2017. The building itself is a work of art, seeming to float above water on Saadiyat Island. Constructed in a web pattern that allows for a flood of natural sunlight, it was designed to simulate the sun through date palm fronds on an oasis. The interior galleries tell the story of humanity in 12 chapters. Each chapter showcases our common connections throughout humanity. From prehistoric artifacts and timeless masterpieces to a contemporary collection, highlights include a Bactrian princess created in Central Asia that dates to the end of the third millennium B.C., an Ottoman turban helmet and Paul Gauguin's "Children Wrestling."

What you will see along the way:
It's hard to imagine that the glamorous Abu Dhabi, located on the southeastern part of the Persian Gulf on the Arabian Peninsula, was a fishing village just a few decades ago. But the discovery of oil reserves in the late 1950s transformed it into an ultra-deluxe, sophisticated city with gleaming skyscrapers, modern architecture, and sparkling fountains that still maintains its Arab mystique. Travel the Corniche, an 8-kilometer stretch of road flanked by a manicured waterfront alive with activity and the stunning Corniche Beach.

Emirates Palace Hotel
Lavish, five-star luxury Emirates Palace is more than a hotel; it's an inspired national landmark with grand proportions that cost $3 billion to build. Photograph its traditional Arabian architectural elements, its magnificent dome and the 114 small domes that decorate the pink granite structure.

Lunch:
Dine at one of the best restaurants by the seaport. Here, a variety of cuisines are served, sure to satisfy any palate.

Paved surfaces outside / tiled and carpeted surface inside the mosque. Mosque Manner Applicable. The dress code is loose, long trousers or a long skirts covering the ankles, and long sleeves to the wrists. Shorts are not allowed. White, tight, fitted, translucent or transparent clothing is not allowed. Women must cover their head with a headscarf; you must bring one with you, as these are not provided. Visible tattoos must be covered.

Depart from the Sheikh Zayed Grand Mosque and drive to the Emirates Palace Hotel.

Arrive at the Emirates Palace Hotel for a Photo stop from outside.

Depart from the Emirates Palace to Heritage Village.

Visit of the Heritage Village.