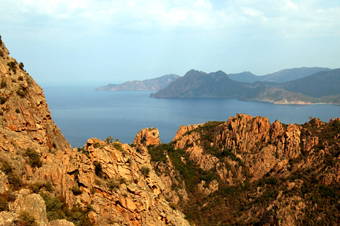 With its mountainous landscape, sparkling aquamarine waters, and pristine beaches, it is no wonder that Corsica has been dubbed Ile de la Beauté (island of beauty).

Begin at the pier and step aboard your comfortable, air-conditioned motorcoach. Accompanied by a knowledgeable guide, you will set out on a narrated drive from Ajaccio along a coastal route to the San Bastiano Pass, where you'll be met with spectacular views of the Gulfs of Lava and Sagone. Take a moment to absorb the timeless elegance of this rugged landscape and its glistening waters that have, at various points in history, brought ancient Greeks, Etruscans, and even the Roman Empire to Corsica's shores!

Enjoy views of the picturesque summer resorts that dot the coastline en route to the ancient Greek village of Cargèse where you will stop for a brief visit.

The village is also famous for its two churches - a Catholic Christian and a Greek Orthodox - that stand facing-almost opposing-each other across a valley, a reminder of old religious rivalries. But bygones are bygones and today the same priest conducts services in the two churches on alternating Sundays!

No tour of Corsica is complete without a visit to its Calanches. Located on the coastal road toward the village of Piana, this surreal landscape of dramatic, weather-carved, red and orange granite rock formations that plunge nearly 1,000 feet to the sea is a UNESCO World Heritage Site.

With a history dating back thousands of years, it is no surprise that Corsica has its share of old legends. And as you take in the raw power and majesty of these fantastic rock forms, you too may buy into the old local legend that they were works of the Devil who created them in a fit of rage after a shepherdess refused his amorous advances. Look closely as the sun plays off the granite and you may even see a giant representation of the shepherdess said to be there. Then again, you may make out the figures of a bishop, a bear, or even a tortoise. The imagination is a playful companion!

Enjoy free time in the nearby village of Piana surrounded by rolling hills, the deep blue Mediterranean, and the majestic Calanches. Browse through quaint shops, take in the pretty pink stone houses perched on the edge of a sheer drop, or simply marvel at the sublime views across the bay. In the end, you will come away knowing in your heart that Corsica is, indeed, the island of beauty.

Depart from ship and drive to Cargese & stop

Drive to the Calanches & stop

Drive back to Piana & stop

Drive return to the ship