Rock of Cashel, The Vee & Lismore 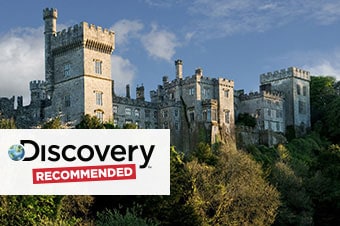 Enjoy a leisurely excursion traveling over the rolling green hillsides and through the heather-covered meadows of Ireland. Be sure to wear comfortable walking shoes and don't forget to bring a camera to capture every memorable moment. Your full day of sightseeing begins as you board your motorcoach at the pier and make your way from Cobh to the town of Lismore in the county of Waterford. Founded in 636 A.D. and renowned as a seat of learning, Lismore would later be plundered by the Danes, sacked by Vikings, and later, conquered by the Normans in 1172. Once you step off the motorcoach, you will have time to discover this fascinating history for yourself as you explore the town on a self-guided tour.

Maps at the Heritage Center offer suggested walks around Lismore and points of interest. Just on the outskirts of town is Lismore Castle, one of the most spectacular castles in Ireland. Built in 1185 by England's Prince John, it has been the home of the Duke of Devonshire since 1753. Rebuilt in the Gothic style during the mid-nineteenth century, the Castle sits on 8,000 acres and boasts gardens, farmlands, and forests. Although the Castle is closed to visitors, the beautiful Gardens are open to the public.

By now you have probably worked up an appetite so you will continue out into the awe-inspiring countryside of Tipperary, Ireland's largest inland county. Journey via The Vee, a gap in the Knockmealdown Mountains. The road climbs in a zig-zag course along the Vee and offers a series of magnificent views of the countryside. Renowned for its rich pasturelands, Tipperary boasts the best Irish dairy products in Ireland. Rich in ancient heritage, Tipperary is home to the charming town of Cashel. According to legend, St. Patrick arrived here in the 5th century and baptized King Aengus, who became Ireland's first Christian ruler.

Upon arrival in Cashel, continue to a local restaurant where you will have views of the legendary Rock of Cashel while enjoying a traditional Irish lunch.

After lunch you will visit the Rock, a prominent hill banded in limestone. Atop the hill sits a number of impressive archaeological ruins dating back to the 12th century. For more than 1,000 years the Rock of Cashel was a symbol of power and the seat of kings and churchmen who ruled over the region. As you stroll through the grounds, you will feel a serene silence, Nearby is the Cathedral. Built between 1235 and 1270, the Cathedral's center features a huge square tower with a turret on its southwestern corner.

At the end of the day, you will climb back aboard your motorcoach for your return journey to your awaiting ship in Cobh.

Tour of Rock of Cashel involves outside visit and there are uneven surfaces and steps.

Depart from ship for a drive to Lismore for free time

Depart Lismore for lunch in Cashel

Visit the Rock of Cashel