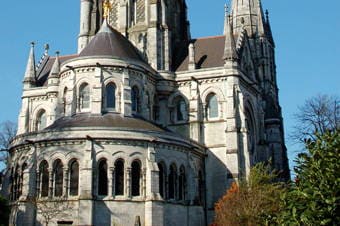 What you will visit:
Cobh (Cork) Driving Tour
Founded by St. Fin Barre in the 7th century, Cork was an important Viking port. The historic city center occupies an island, and the River Lee flows around the heart of the city. Known as The Rebel City, colorful Cork is the Republic of Ireland's second largest city and a thriving university town with a wonderful culture, candy-hued houses and an authentic pub scene. Despite its large size, Cork has the atmosphere of a charming town.

Jameson Experience Midleton
Distilling was a centuries-old tradition in Ireland, but in the 17th century the British imposed licensing laws, closing down small distillers. John Jameson, a Scots lawyer who immigrated to Ireland, launched John Jameson Whiskey (with an "e" like American whiskey) in Dublin in 1780. Your visit to the Jameson Experience begins with an audiovisual presentation that chronicles the history of Irish whiskey making. Then tour the old Midleton Distillery. Founded in 1795 as a woolen mill, Old Midleton was converted to Jameson whiskey production in 1825. Enjoy a guided tasting of three Whiskey varietals where you will discover the complexities of this world renowned whiskey. Conclude with a glass of Jameson whiskey or take advantage of the special "Barrelman's Punch" cocktail, chosen by Tommy Byrne, the International Whisky Ambassador for Jameson, exclusively created for your visit. Don't miss visiting the gift shop for your Jameson souvenir.

Tommy Byrne - Jameson International Whisky Ambassador
Tommy is the International Whiskey Ambassador & Academy Tutor based at the Irish Whiskey Academy at the Midleton Distillery. In training for this role Tommy gained practical experience through placements in all departments of the distillery including brewing, distillation, cask filling and maturation and he achieved a Distinction in the General Certificate in Distilling from the Institute of Brewers & Distillers. Tommy hosts educational courses on whiskey production at the Irish Whiskey Academy for attendees from all over the globe and attends global whiskey fairs conducting educational seminars.

What you will see along the way:
Your narrated Cork city drive travels down Merchant's Quay, St. Patrick's Street, Grand Parade and the Mall as your guides point out the city's elegant Georgian architecture. St. Patrick's Street is the city's main boulevard, while South Mall and Grand Parade are home to a number of Irish companies and financial institutions. Continue past City Hall, built in 1932. The current hall was paid for by the English crown and replaces the building burned by the British Army during Ireland's War of Independence. You will also pass St. Fin Barre's Cathedral. Designed by William Burges, considered one of the greatest Victorian architects, the elaborate Gothic revival façade features a copper "Resurrection Angel" atop the sanctuary roof. Local legend claims that, if the angel ever topples from its place, the end of the world is not far off.

The minimum legal drinking age in Ireland is 18; passengers under 18 cannot have an alcoholic drink.