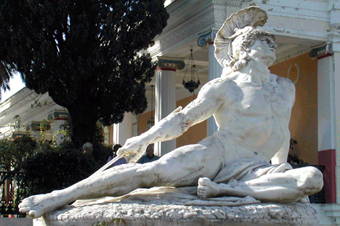 Your tour begins as you board your motorcoach for a 30-minute scenic drive to the Achilleion Palace. En route, you'll pass through olive, lemon and orange groves interspersed with cypress trees, and the Old Fortress that stands guard over the harbor and Corfu.

During the period of the 6th and 13th century A.D, Corfu stood within the fortifications of the Old Fortress. Built by the Byzantines, it was reinforced by the Venetians and later by the British. Although much has been destroyed, the Venetian insignia still remains, as do the lower ramparts and a steel bridge that connects the fortress to the city.

Upon arriving at the Achilleion Palace, you may be awe-struck - perhaps from its sheer magnificence or because it feels oddly familiar; Achilleion Palace was featured in the James Bond classic, For Your Eyes Only.

Achilleion Palace was built in 1889-1891 for Princess Elisabeth von Witelsbach of Austria, and paid homage to Greek mythology. Upon her death, Kaiser Wilhelm II made the palace his summer home until WWI. You'll marvel at the formal Italian garden with its trees and statuary, and the exquisite mural positioned at the reception enclosure that portrays Achilles carrying the dead body of Hector.

As an alternartive to Achilleion Palace, Mon Repos Palace may be visited.

Enjoy a photo stop in Kanoni. Its name derives from the original gun placed here in 1810 by the French to disrupt the blockade by the British. From the Belvedere you can enjoy the view of perhaps Corfu's most photographed shot: the twin islets of Vlachernae and Mouse Island.

After your palatial visit, you'll board your motorcoach for a drive through Paleokastritsa Village, a seaside village dotted with luxurious olive trees and pine trees reaching the edge of the coast - considered by many to be the finest scenery in the entire Mediterranean.

The Monastery of Agia Paraskevi is your next stop. The female monastery founded in the 17th cent is located above Palaiokastritsa at a panoramic location. The Monastery's Katholikon is a simple Basilica and houses post-Byzantine and Ionian-style icons. It celebrates the memory of Agia Paraskevi on 26th July with the participation of all nearby villages

Next on your itinerary is a photo stop at Lakones-Bella Vista Village, a picturesque village with one road running through the middle of town, and some of the best views on the island with Paleokastritsa and the boats in the harbor well below.

Because sightseeing can work up an appetite, you'll enjoy traditional Greek cuisine with a glass of wine, beer or mineral water at a first-class restaurant. After a sumptuous lunch, you'll set out for Corfu Town. Best seen on foot, the old town is a mixture of the medieval and the modern. With a guide by your side, you'll tour Old Corfu Town where you'll see the Esplanade (planted with palms and eucalyptus by the French), the English cricket pitch, and the Palace of St. Michael and St. George, once home to Corfu's British rulers. You're free to follow the narrow streets and small plazas to the church of St. Spyridon, the final resting place of the island's patron saint.

Your tour concludes with a walk back to your motorcoach and a relaxing drive back to the pier. With Corfu behind you, you'll leave with a myriad of unforgettable memories..

Should the Achilleion Palace be closed for maintenance or restoration works, the Mon Repos Palace will be visited instead.
Shorts are not permitted at the monastery; women are also required to have their shoulders covered.

Anticipate a few steps to visit the Achilleion Palace, as well as two staircases without handrails to visit its gardens.The old town of Corfu will be explored on foot over level terrain and streets - those with physical limitations should take this into consideration.

Flash photos are not permitted inside the church at the monastery.Use of an audio headset (included) will enhance your tour experience.