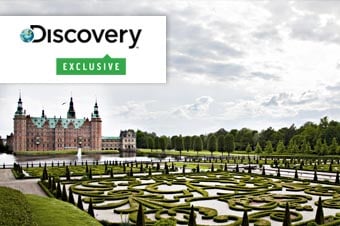 Venture into the land of fairytales and castles on a Discovery Exclusive full-day tour that offers unparalleled access to the historic region of North Zealand, home to three magnificent royal castles: Fredensborg Castle, Frederiksborg Castle, and Kronborg Castle, made famous as the setting of Shakespeare's Hamlet.

Reboard the motorcoach and continue on to Fredensborg Castle, the summer residence of the Queen and one of the grandest in Scandinavia. Along the way, stop at a traditional inn for lunch before photographing the castle's exterior, rightly referred to as the Danish Versailles. Your zoom lens might be able to pick up one of the castle's most unique traditions: state leaders are asked to inscribe their names in one of the windows with the aid of a diamond pen.