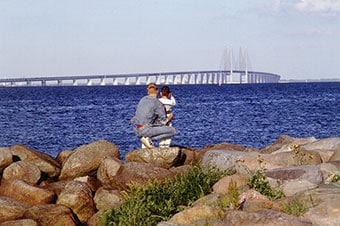 Climb aboard your motorcoach at the pier for a scenic tour of one of the most historic cities in the Baltic region. As you make your way through Copenhagen, your guide will point out many of the most interesting and popular attractions en route to Dragør.

Near the pier, resting on a pile of granite boulders in Copenhagen's harbor, is the five-foot-tall bronze statue of The Little Mermaid, based on the immortal tale by Hans Christian Andersen. Continuing on through the city, you'll have perfect views of Amalienborg Palace, a beautiful complex of four palaces where the Queen and the royal family reside during the winter months, and Christiansborg Palace, site of the Danish Parliament. In the heart of the city sits City Hall Square, home of Copenhagen's mayor and city council. One of the main features of the 100-year-old City Hall building is its 350-foot tall tower. Nearby is the famed Tivoli Gardens. Founded in 1843, it's one of the oldest amusement parks in the world. Known for its beautiful parade of flowers, restaurants, cafés, and a concert hall, it's also famous for two spectacular rides. The wooden roller coaster that was built in 1914 is not only the world's oldest but it's still in operation! Plus, the Star Flyer ride is the world's highest carousel standing over 262 feet high! Further on, you'll drive along the colorful canal area known as Nyhavn and pass by the Carlsberg Glyptotek Art Museum, which holds a large collection of Egyptian, Greek, Roman and Etruscan art.

Heading south out of the city, you'll make your way to the small fishing village of Dragør on the island of Amager. Narrow, cobbled streets and butter-yellow houses topped with thatched rooftops give the village a fairytale look. When you step off the motorcoach, you may see fishermen at the harbor hauling in their daily catch (be prepared for swans, ducks and other birds to swarm you begging for food).

At the conclusion of your tour, you'll re-board your motorcoach for the ride to the airport, where you'll need to pick up your luggage from the motorcoach hold.

This tour may be offered on the day of disembarkation to passengers with late flights after 3:45pm.

Tour involves walking in Dragoer fishing village, and is therefore not recommended for passengers with wheelchairs and limited mobility.