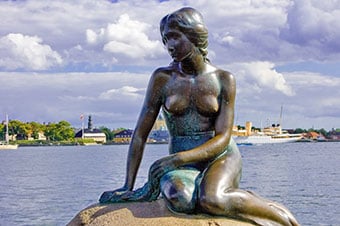 Your narrated tour of the city begins at the pier and winds its way past many of Copenhagen's most popular sites. You'll pass Copenhagen's 370-year-old Old Stock Exchange building, which boasts a 196-foot 'dragon-spire' tower topped with three golden crowns symbolizing the union of the Nordic countries. Other places you'll see on your journey include the 16th-century Holmens Church, the site of the royal marriage between Queen Margrethe II and Prince consort Henrik in 1967, the Town Hall, the famed Tivoli Gardens, and the Carlsberg Glypotek Museum, which holds over 10,000 works of art.