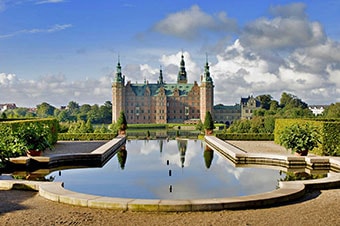 Set off on an enjoyable, narrated tour to your first destination of Hillerød, home of Frederiksborg Castle. Seeing Frederiksborg Castle, you might think that this elegant Dutch Renaissance structure sitting on three small islands, is right out of a fairytale! In fact, the Castle had been the royal residence and setting for important ceremonial events since the beginning of the 17th century to the 1850s. Your guided tour begins at the Neptune Fountain and visits the rooms of the King's Wing, the Church, and the impressive Knight's Hall, which boasts an intricate carved wooden ceiling. Today, the castle has been transformed into a national historical museum and is best known for its outstanding collection of portraits - the largest of its kind in Denmark.

After the visit to Frederiksborg Castle, your tour will continue through the picturesque countryside of Northern Zealand. Before reaching your next destination, Kronborg Castle, there will be a photo stop at Fredensborg Castle, one of the Queen's most used residences.

Kronborg Castle, situated in the narrow sound between Denmark and Sweden, is often called 'Hamlet's Castle.' This dramatic Renaissance castle was the inspiration for Shakespeare's tragedy, 'Hamlet.' Originally built in 1420 and expanded between 1574 and 1584 by King Frederik II, the castle's historic and rustic surroundings are listed as a UNESCO World Heritage site.

Continue along the coastal road with the lovely view of sea past impressive manor houses and small marinas. Before returning back to the pier you will make a stop by the Little Mermaid. No visit to Copenhagen is complete without seeing the city's most famous symbol. Completed in 1913, this famous statue was erected to express gratitude to Hans Christian Andersen and his world-known fairy tales.

The drive between Copenhagen and Frederiksborg is approximately one-hour each way.

Flash photos are not permitted in Frederiksborg Castle.

Due to approximately 100 stairs at the Frederiksborg castle and some walking on cobblestone roads, this tour is not suited for passengers with wheelchairs or walking difficulties.

Tour may be operated in reverse order..

Drive to Kronborg Castle with Photo stop at Fredensborg

Re-board motorcoach for coastal drive back to the ship, incl. Photo stop at the Little Mermaid