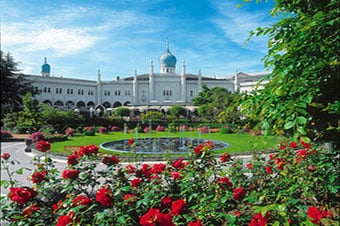 Your motorcoach will wind its way through Copenhagen as you make your way to City Hall Square, City Hall and the Glyptotek Art Museum. You will pass Rosenborg Castle, the fairytale Dutch Renaissance structure, built in 1606 as the summer residence of King Christian IV and now a museum holding the Danish crown jewels. In Old Copenhagen, you will see the old Stock Exchange and the picturesque and brightly colored waterfront canal district of Nyhavn, once the home of Hans Christian Andersen. Stop by the opera for a photo of Amalienborg Palace, the winter residence of the Danish royal family, which is made up of four identical rococo palaces around a spacious octagonal courtyard. You'll stop as well to capture images of the iconic Little Mermaid statue, a commemoration of the city's famous storyteller.

Next, it's on to the magnificent Christiansborg Palace, the seat of the Danish parliament and house of the Queen's Royal Reception Rooms. The Great Hall offers magnificent settings for state dinners hosted by the Queen, and in this very hall, take a glimpse of the tapestries telling more than 1000-years of Danish and international history. As you walk through the palace, Kings and Queens from yesteryear are gazing down at you. No visit to Christiansborg is complete without visiting the throne room. On the balcony of this room, overlooking Copenhagen, Queen Margrethe II was proclaimed regent of the Danish realm in 1972.

Next, hop aboard a modern canal boat for a 50-minute tour of Copenhagen's canals and inner harbor. You will cruise along Christianshavn and Frederiksholm canals, the perfect viewing point for many of the city's historical buildings national landmarks. Nyhavn Canal is lined with 500-year-old step-gabled homes. Your guide will point out the old naval base of Holmen, the Copenhagen Opera House, and the new Royal Library, known as the Black Diamond because of its polished black granite exterior.

Return to your motorcoach at the designated time for a relaxing ride back to port.

The canal boat ride will be on a public boat when tour has less than 60 guests booked.
The canal tour does not sail in the Nyhavn Canal district, it only passes by.
Backpacks, bigger bags, umbrellas, water bottles and alike are not permitted in the castle