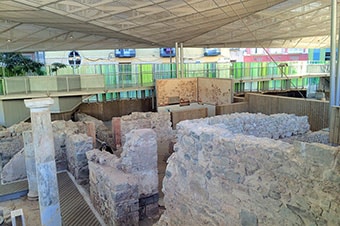 What You Will Visit:

Roman Theater:
Constructed between the fifth and first centuries B.C., the Roman Theater lay undiscovered until 1988, when a full restoration took place. The newly discovered theater, which once welcomed 6,000 spectators in stadium seating carved from existing rock, is situated on a hillside affording panoramic views. The adjacent museum offers an in-depth look at the archaeological remains and the restoration process.

Roman Forum:
The open-air archaeological site dates back to the first century and today reveals the remains of a Roman colony from 54 B.C. known as Carthago Nova. Buried for over 20 centuries before it was discovered in the 1980s, the Roman Forum is a multi-terraced area complete with the remains of a thermal bath complex, an atrium building once used for religious banquets, and a colonnaded courtyard surrounded by 13-foot, intact walls adorned with their original 2,000-year-old murals.

Civil War Shelters:
Cartagena, the base for the Republican Navy, was one of the hardest-hit cities during the Civil War of Spain. Bombings carried out by Italian and German planes terrorized the city and precipitated the need for air-raid shelters to be built throughout the city. A museum, housed within a massive shelter, presents a detailed account of life in the shelters as well as artwork and artifacts from the time.

What you See Along the Way:

Cartagena, Old City
Cartagena, one of the oldest cities in Spain, dates back to 223 B.C. Its history is reflected in its eclectic mix of architecture. Most of the city's oldest monuments date from the days of the Roman Empire, but baroque, neo-classical and art nouveau structures are found here as well. Spanish buildings and an intriguing blend of church domes, clock towers and ocean views entice visitors who stroll its colorful streets, squares and waterfront.

Tour not recommended for guests with walking difficulties.

Sequence of tour stops may vary.

Many shops will be closed on Sundays, Bank Holidays & during lunch time.

Departure from pier to Roman Theatre

Re Board the motorcoach and return to the pier