Colonial Cartagena Sightseeing Tour On Your Own 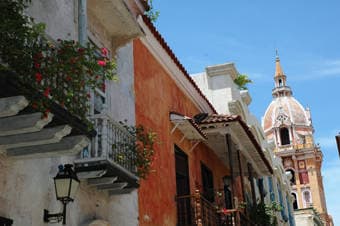 Soak up the historical and cultural sights of colonial Cartagena with a self-guided tour inside Las Murallas, the thick walls built to protect the city from its enemies in the 16th century. Wear light clothing and comfortable walking shoes; and don't forget to bring a camera to capture the sights.

Your three-and-a-half-hour tour begins as you board your air-conditioned transportation for a scenic, narrated drive to downtown Cartagena. Once you arrive, you'll be guided along a walk lined with monuments of the former leaders of Colombia. Once inside the walled city, you'll receive a brief overview and a map, and guided through the main plaza, Plaza de la Aduana, to Simon Bolívar Square. Then, for approximately 90 minutes, you're free to explore on your own on foot; or a unique way to see the city is to take a ride in a horse-drawn carriage. As you walk or ride through the picturesque streets, you'll be charmed by terraces entwined with flowers, lush parks and entertaining street musicians.

Declared a UNESCO World Heritage Site the Old City area is comprised of three sections – El Centro, where most of the historic buildings are located; San Diego, home to the city's merchant class; and San Pedro, where the nobles and the notables resided.

In the center you will find many attractions such as the Palacio de la Inquisicion, the Inquisition Museum. From the outside, this charming building is a prime example of colonial architecture, but inside, is a museum featuring a spine-chilling collection of instruments of torture from the Spanish Inquisition, as well as artwork from the pre-Columbian, colonial and independence eras.

During the colonial period wealthy merchants of the town once lived in the San Diego neighborhood. Here, you'll discover the Las Bovedas shopping arcade, the School of Fine Arts, the Plaza de Madrid and the legendary Sofitel Hotel Santa Clara, which was originally built in 1621 and known as the Convento de las Clarisas. Nearby is the Plaza de los Coches, where slaves were once bought and sold, and Puerta del Reloj, which was once the main gateway into the walled city.

Two must see churches reside in San Pedro. Construction of the Cartagena Cathedral was begun in 1575 but partially demolished by Sir Francis Drake's cannons. The church and convent of San Pedro Claver was built in the 17th century and displays exquisite statues and old-world furnishings honoring the life and work of missionary Saint Peter Claver, the patron saint of slaves and the first saint canonized in the Western Hemisphere.

After time on your own, you'll meet at the main city entrance where you will re-board your transportation for your return to the ship.

Participants should be in good physical condition and be able to easily navigate narrow walkways and uneven pathways and terrain. This tour is not wheelchair accessible. Wear comfortable, lightweight clothing, sensible footwear, sunglasses and sunscreen. Bring your camera. Admission fees to the venues are not included.

Depart port for a narrated drive to the Colonial City

Arrive at Colonial City for guided portion of the tour

Board your transportation for your departure to the ship