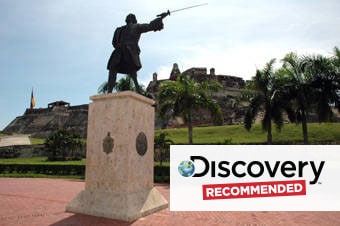 Your tour begins as you board your transportation for a scenic 15-minute drive through the Manga residential area to Castillo de San Felipe de Barajas (Fort of San Felipe). En route, you'll witness "Republican" architecture and several mansions restored to their original splendor.

Upon arriving at the magnificent fortress, you'll quickly see why Cartagena was the most impenetrable city of the Spanish Main. This 17th-century construction is the largest Spanish fort in the New World, representing the most important work of Spanish military engineering in South America. A must see is the tunnel system meant to facilitate supply and evacuation of the fortress.

Your next stop is Las Bóvedas, where you will learn about the dungeons and slave prisons. Afterwards, visit Baluarte Santa Catalina atop Las Bóvedas for a unique view of the Caribbean.

Next you'll visit the famed Old City, a walled city with narrow streets and well-tended Spanish Colonial buildings. The city is connected by a series of bridges and divided by 17th-century walls into an "historic old city" and a cosmopolitan "modern city." Many local bars and restaurants in the old walled city's compact historic core, a UNESCO World Heritage site, remain its shining centerpiece. You'll stroll to the 18th century Historical Museum of Cartagena, a fine example of colonial architecture, yet an eerie reminder of "dark" days gone by. The museum façade features grilles and balcony, colonial-style, and a gate reflective of the baroque style. Behind the charming façade, a museum displays instruments of torture from the Spanish Inquisition, pre-Columbian, colonial and independence era art.

You'll wander the narrow cobblestone streets and city squares of the Old City, including Plaza de San Pedro. Within sight is San Pedro Claver Church. Built in the 17th century, the church displays exquisite statues and old-world furnishings honoring the missionary Saint Peter Claver, the patron saint of slaves and the first saint canonized in the Western Hemisphere.
Continue your journey to the Navy Museum, established in 1986, restored ruins of the Jesuits school, discover the historic military efforts of Cartagena, enjoy the wealth of historical artifacts, maritime life and naval history of Colombia, enjoy a local show and a refreshing soft drink.

You will have approximately 30 minutes to explore by your own & shop into the Old City, where you will be able to find many boutique and jewelry shops, before returning to the ship.

There is a paved, fairly steep incline that must be negotiated to reach the interior of the fortress. A complimentary beverage is included in the tour. The name of the Inquisition Palace has changed to the Historical Museum of Cartagena.

Depart from ship for inside visit of San Felipe Fortress

Inside visit of the Historical Museum of Cartagena

Visit the Navy Museum and attend a local Show

Explore the city on your own