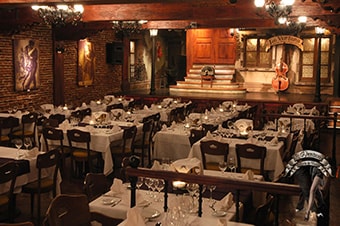 Founded in the early 16th century by Spanish aristocrat Pedro de Mendoza, Buenos Aires began life as a small colonial port. After the cattle boom of the 1880s it began to grow into the eclectic blend of contemporary sophistication and Old World culture that it is today.

Enjoy the ever-changing panorama along wide, jacaranda-lined boulevards on a scenic city drive that kicks off this active full-day excursion. Take in views of El Centro and the old Bohemian San Telmo district. Your transportation will drive past the Colon Theatre so that you'll be able to capture mementos of one of the world's grandest opera houses.

At La Boca, enjoy a stroll along the Carminito, the main street, to soak up the flavor of one of Buenos Aires' oldest and most authentic neighborhoods. Browse the outdoor galleries where artists hawk their work, marvel at the brightly-painted wood-and-corrugated-steel "conventillos" (shared homes); and take a peek inside the historic tango cafes.

Traffic permitting, your excursion will continue to the Plaza de Mayo which is the political and cultural heart of the city. Lining the square are a number of historic buildings including the Metropolitan Cathedral, the government ministry buildings and the famous Casa Rosada, a National Historic Monument that was once home to Juan and Eva "Evita" Perón.

Evita, the second wife of President Juan Perón, was the First Lady of Argentina from 1946 until her death from cancer at the age of 33. She gained influence by speaking on behalf of labor rights, and founded Argentina's first large-scale female political party. Eva also devoted herself to the plight of the impoverished lower classes into which she herself was born. For her work, she was bestowed the official title of "Spiritual Leader of the Nation" and is still revered long after her death.

At La Recoleta Cemetery, you'll wander through the last resting place for many of Buenos Aires' most influential people, including the immortal Evita. A fanciful array of 6,400 Neoclassical, Neogothic, Art Nuevo and Art Deco-style mausoleums are laid out like a city with street names and a town center. During your guided tour, listen to stories of "Evita" as you linger at her black marble crypt.

To complete your immersion in Argentine history and culture, enjoy a lunch of regional cuisine at a local restaurant followed by a specially arranged performance at a traditional tango hall in San Telmo.

Born around 1880, the tango began life as the sultry dance and music of Argentina's fringe classes. It combines elements from many cultures, creating a New World music that swept across Argentina and became a popular dance form on the world scene.

Due to traffic regulations the stop at Plaza de Mayo maybe omitted.

Due to timing restrictions, this tour does not go to Palermo Woods.

Lunch and Tango Show at a local restaurant