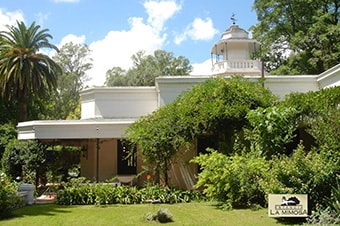 Buenos Aires, the capital of Argentina, is an eclectic blend of contemporary vitality and old world languor. Your active full-day excursion reveals a mélange of historic architecture, high-rise hotels, glitzy shops, humble barrios and the vast open plains of the Pampas.

Begin your adventure on a narrated drive with a guide who is well trained to share highlights of local history and culture. Watch through your window as you pass through Palermo, a lovely district of parks, gardens, mansions, and embassies.

Take it all in on your way to La Recoleta Cemetery, one of the city's most sought-after attractions. Arrive for a guided tour through this remarkable collection of over 6,400 beautifully crafted mausoleums. Located in the city's exclusive Barrio Norte district, it is the final resting place for many of Argentina's most notable personages.

Marvel at the panorama of Neoclassical, Neogothic, Art Nouveau and Art Deco styles with each crypt a unique flight of fancy depicting everything from a Greek temple to a fairy tale castle. Laid out like a well-planned city with street names and a town center, the cemetery makes for an intriguing stroll.

The second wife of President Juan Perón and the First Lady of Argentina from 1946 until her death in 1952 at the age of 33, María Eva Duarte de Perón is interred in a magnificent black marble crypt. Argentina's most famous figure, Eva made a huge impact on her country and was widely loved.

While she turned down the Vice-Presidency that she was offered, Eva became a strong political force. Her efforts helped women win the right to vote, she founded the nation's first large-scale female political party, and the philanthropic work of her foundation helped to alleviate the suffering of Argentina's impoverished lower classes.

Saying goodbye to Evita and La Recoleta Cemetery, you'll re-board your transportation for the scenic drive into Argentina's vast and scenic plains, the Pampas. You'll arrive at an Estancia, where the timeless traditions of the Argentine gaucho are lovingly preserved.

During your exclusive visit to the ranch, you can explore the grounds and enjoy a traditional asado al asador, the gaucho-style country barbecue featuring famous Argentine beef. After lunch, you'll be treated to a colorful folkloric show of Argentine music, dance and renowned feats of horsemanship.

In Argentina, the term gaucho originally meant vagabond and was used to describe members of the lowest levels of society who survived by roaming the Pampas and working cattle. Their dress consisted of a woolen poncho, neck fastened bandana, pleated trousers and long leather boots and they had no home or belongings other than what they carried on horseback.

Because there was no way to preserve meat on the open plains, the horsemen of the Pampas invented the barbeque or asado. Over time, their excellent horsemanship and military aptitude brought them much repute and their colorful way of life was eventually romanticized by such poets as José Hernández.

Tour order may vary. This tour is only available on transit calls.