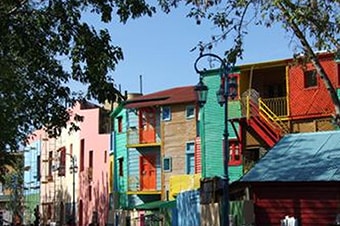 Experience the scintillating capital of Argentina, Buenos Aires, on this half-day excursion. You'll visit La Boca, the birthplace of the tango; the historic Plaza de Mayo where Eva Perón made her famous Renouncement speech, traffic permitting; and the Recoleta Cemetery where this colorful Argentine heroine was laid to rest.

Founded in the early 16th century by Spanish aristocrat Pedro de Mendoza, Buenos Aires began life as a small colonial port. After the cattle boom of the 1880s it began to grow into the eclectic blend of contemporary sophistication and old world culture it is today.

Embark your air conditioned transportation tour at the pier and explore the "Paris of the South" with your knowledgeable English-speaking guide. Enjoy the ever-changing panorama as you travel the city's wide, jacaranda-lined boulevards. Take in views of El Centro, and the famed Tres de Febrero Park in Palermo, the largest of Buenos Aires' 150 parks.

Have your camera handy during your city drive for photos of the old Bohemian San Telmo district and the Colon Theater, one of the world's grandest opera houses. You're sure to capture intriguing images to share with all your family and friends back home.

When you arrive in La Boca, named for its position at "the mouth" of the Riachuelo River, you'll disembark for a stroll along the Carminito, the main street, to soak up the flavor of Buenos Aires' oldest and most authentic neighborhood.

Traffic permitting, your motorcoach will drive through Plaza de Mayo which is the political and cultural heart of the city. Lining the square are a number of historic buildings including the Metropolitan Cathedral, the government ministry buildings and the famous Casa Rosada, a National Historic Monument that was once home to one of the world's most celebrated political figures.

Maria Eva Duarte, the second wife of President Juan Perón, was the First Lady of Argentina from 1946 until her death from cancer at the age of 33. She gained influence by speaking on behalf of labor rights, working running the Ministries of Labor and Health and founding Argentina's first large-scale female political party.

Eva also devoted herself to the plight of the impoverished lower classes into which she herself was born. Through her Foundation, she provided philanthropic assistance to her "descamisados" or "shirtless ones." She was rewarded by the Argentine Congress with the official title of "Spiritual Leader of the Nation" and the working people regarded her as a saint.

At La Recoleta Cemetery, you'll wander through the last resting place for many of Buenos Aires' most influential people. A fanciful array of 6,400 Neoclassical, Neogothic, Art Nuevo and Art Deco-style mausoleums are laid out like a city with street names and a town center. During your guided tour, listen to stories of "Evita" as you linger at her black marble crypt.

Due to traffic regulations the stop at Plaza de Mayo maybe omitted.