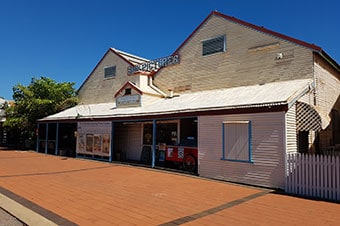 Your narrated tour begins as you board your air conditioned coach for a scenic drive through Broome. A perfect excursion for those who like to see the sights without a lot of walking, this comprehensive tour is perfect for the first time visitor and will take you to many of the city's most interesting and popular sights.

While your driver shares the city's rich and fascinating history, sit back and soak up the sun as your bus winds its way through the streets of Chinatown. Once filled with saloons, boarding houses, pool halls and pubs during the late 1800s, today it's a bustling community of pearl showrooms, galleries, and cafés. On your journey, you will pass Sun Picture Theater; at 100 years of age, it's one of the world's oldest open-air movie houses. Continuing on, you will come to the Broome Historical Museum, whose exhibits showcase Broome's history as a major pearling port, plus Aboriginal artifacts, and a large collection of beautiful shells. Another sight you will see is the old jail; the oldest structure in town, dating back to 1906. Next, you will drive by Captain Gregory's House, one of Broome's first pearling tycoons, and the Pearl Luggers Museum, which is filled with artifacts and memorabilia from the days when Broome was famous as a pearling port. Mangrove Bay and its picture-perfect views of green mangroves, white sand, and turquoise water beckons next.

After your tour through the city, you will have a few photo opportunities, including a brief stop at the Japanese Cemetery. A poignant reminder of the dangers of pearling, the cemetery is the final resting place for over 900 Japanese divers who succumbed to divers paralysis or from drowning. Dating back to 1896, the unique headstones are crafted out of colorful sandstone rocks.

Another photo stop is Pioneer Park. Located within the limits of Town Beach, the park overlooks Broome's original jetty, once used by pearl luggers in the early days of the 20th century. It's also the site of a Japanese air attack on March 23, 1942 during World War II. Nearby is Pioneer Cemetery, where many of Broome's early settlers are buried, dating back to 1880. At the end of your tour return you to the pier.