From Market to Plate 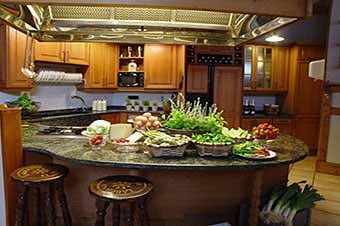 In the Basque region of Spain, one of the most celebrated culinary regions in all of Europe, food is essential to the local way of life, and the area is known for traditional fare as well as having originated Spain's avant-garde cuisine. Bilbao has an excellent gastronomic reputation and is home to everything from traditional taverns to elegant Michelin star restaurants, making it a foodie paradise.

Your half-day adventure begins when you board a comfortable motorcoach and head into the Old Town, the heart of Bilbao. Here you'll embark on a guided walking tour that makes the most of the Renaissance, baroque and modernist architectural gems but of its culinary hotspots as well.

The enclave known as the Seven Streets is found in the oldest section of Bilbao's Old Town. As you stroll, your knowledgeable guide will point out such highlights as the magnificent Gothic Cathedral of Santiago, the Gothic Church of San Anton and the lively outdoor Plaza Nueva (New Square). While maintaining its ancient character, this vibrant pedestrian zone brims with sidewalk cafes, cheese shops, tempting confectionaries, traditional bakeries and, of course, the tapas bars. Here you'll find "pinchos," from the Spanish word "to prick," the style of tapas served in the Basque region where the small bites are skewered on toothpicks.

At the famed Ribera Market, the largest indoor food market in Europe, you'll be met with a symphony of sights, smells and sounds. Vendors beckon you to try their savory offerings, shoppers jostle for bargains and the smells of the daily catch, cured meats, fresh produce and pungent spices tantalize the senses.

Travel with your Chef while they fill their bags with the best seasonal offerings, board the motorcoach for a short drive to a local txoko, a typically Basque type of gastronomical society where people come together to cook, experiment with new ways of preparing food, eat and socialize. Here you'll enjoy a cooking class and a scrumptious lunch.

Traditionally, txokos were all-male gastronomic societies established in the 19th century and enjoyed by invitation only. Meals were prepared without a menu, and all members shared the cooking duties among themselves. Many participants have been friends since childhood, and the love of cooking has been instilled since they were young. The creation of these culinary fraternities was due to the fact that the Basque is a matriarchal society; the txokos represented a place where men could create their own community with membership passed from father to son.

You're invited into this exclusive society to participate in an interactive cooking class. The atmosphere is boisterous and fun, and the chefs will dazzle you with their skill and ingenuity in the kitchen. Your lunch is prepared before your eyes and served with a flourish.

At the conclusion of this day, a feast for the senses, sit back and relax on your journey back to port.

Please note that the lunch the guest will eat will be prepare on advance by the chef as the food they will be cooking will not be sufficient for everybody.

Departure from pier and drive to the old town

Guided Visit of the Old Town and the Ribera Market

Drive to the Txoko to partake in a Cooking class