Ultimate Berlin & the Reichstag by Coach: A Discovery Exclusive 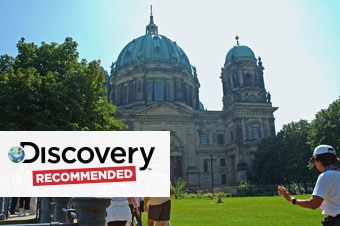 Since its founding over 750 years ago, Berlin has served as the epicenter of the country's history, art and culture. In 1961, the Berlin Wall separated the east and west sides but after the fall of Communism in 1990 the city was restored as the capital and as a major world city.

Join a small group for an all-day comprehensive tour around the city and get to know its impact on world events and culture.
Before you embark on your outing be sure to wear comfortable shoes and bring along your camera to preserve the day's everlasting memories.

Your day begins with an approximately 2½ hours scenic motorcoach ride through the North German countryside. Enjoy the sight of green forests and undulating hillsides as they pass by your window. During the journey, your English-speaking escort will hand out a snack box.

Once you arrive in Berlin, you'll meet your knowledgeable guide who will provide commentary as you make your panoramic journey through the city on your comfortable motor coach.

Amid Berlin's stunning buildings that date back to the 18th century you'll find reminders of the Cold War such as Checkpoint Charlie, the former border control point that separated the East and West was the site of a standoff between Soviet and American tanks during the Berlin Crisis of 1961.

Just a few minutes away is your first photo stop--the Berlin Wall. Measuring 96 miles around West Berlin, the Wall's twelve-foot-tall and four-foot-wide mass of reinforced concrete was intended to halt the steady stream of defections from East Germany between 1961 and 1989; today, the Wall lies in sections, a reminder of freedom and democracy.

Back on the coach you'll stop at a restaurant for a traditional German lunch before rejoining or coach for the remainder of your tour.

Next stop on your agenda is the Brandenburg Gate, one of the nation's best-known landmarks. Commissioned by King Frederick William II of Prussia in 1788, it served as the border between East and West Berlin during the Cold War; today, it symbolizes German and European unification.

Photos taken you'll travel to the Reichstag, home of the German Parliament. Built between 1874 and 1894, the six-story, 143,052-square-foot complex boasts four towers that rise 131 feet. The building was given new life in 1999 when a dazzling glass and steel dome was constructed atop the roof.

After you arrive you'll be escorted to a popular rooftop restaurant adjacent to the famous dome for a glass of sparkling wine. From this unique vantage point you have 360-degree views of the surrounding Berlin cityscape.

Then, it's time to shop along the Kurfürstendamm, Germany's most famous shopping boulevard.

When your time in Berlin comes to an end, on your ride back to the ship enjoy a light snack .

A Passport is required to enter the Reichstag building. Tour sequences may vary to avoid congestions at venues.
The coach for the city tour is equipped with seat belts, guests are required to use them. Guests may not stay on the coach during free time. The tour runs during all weather conditions. Guests should be prepared for the possibility of rain.
It is advisable to bring some small change of Euro coins as some shops do not accept other currencies nor Credit Cards for small purchases (furthermore, guests may have to pay for public bathroom facilities, usually between 50,- cents and 1,-Euro pp). Shopping location may vary as most shops are closed on Sundays and bank holidays. Only a few souvenir shops may be open.

Please note that due to maintenance works the Reichstag's glass cupola can be closed on short notice. The Reichstag itself and the restaurant on top will be still open.

Please note that the Reichstag can be closed on short notice and without a pre notice as it is the official seat of the German parliament.

Guests need their passports to enter the Reichstags building; they need to pass a security check point

Depart ship by chartered coach to Berlin. Enjoy the scenic ride to Berlin through the Mecklenburg countryside.

Arrive in Berlin, meet your local guide and start your sightseeing tour, see the Berlin Wall, Checkpoint Charlie and Gendarmenmarkt

Lunch at a traditional restaurant

Sightseeing tour continues with a photo stop at the Brandenburg Gate; enroute guests will see the Holocaust Memorial & Gendarmenmarkt Square

Arrival at the Reichstags followed by security check

Time at site:
01:00
Inside visit:
Yes
Air conditioned:
No

Your tour continues with sightseeing of the former West Berlin where guests will have free time for shopping at the famous Kurfürstendamm.

Re-board motorcoach for transfer to ship