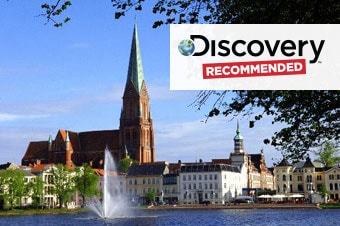 Your tour begins as you board a motorcoach for a scenic, approximately 90-minute drive to Schwerin, the capital of Mecklenburg founded in the 12th century by Henry the Lion. En route, you'll travel on the famed Autobahn and take in views of the Northern German countryside with its small farms and windmills.

Upon arriving in Schwerin, you'll embark on a 30-minute boat ride on Lake Schwerin, Germany's third-largest lake. You'll witness 'Kaninchenwerder,' a small island in the middle of the lake, the skyline of the quaint old town of Schwerin, and the Schwerin Castle, a 'fairy-tale' palace set on the banks of the lake.

A walking tour is next on your itinerary as you explore the city center of Schwerin. Because sightseeing can work up a hearty appetite, you'll stop for a three-course meal at a local restaurant in the historic city center, followed by free time to browse and shop for souvenirs.

After picking up a gift or two, you'll board a trolley train for an approximate 20-minute ride to the Schwerin Castle through the city center. You'll pass the old market, the Town Hall and the Schelfstadt district, popular for its half-timbered houses, and the Schelf Church.

The Schwerin Castle will take your breath away as your inhouse guide details its countless accouterments. The former living, social and ceremonial rooms are now used by the palace museum to exhibit pictures, sculptures, furniture, weapons, medals, jewelry and other objects d'art. Keep your camera ready as you witness the grand living quarters and the ceremonial rooms, including the ancestral portrait gallery and the throne room.

Next, you'll travel to Rostock for an orientation tour of this medieval town. You'll step off the coach near Market Square which is lined with well-preserved medieval buildings boasting gabled roofs and timbered façades. Here enjoy an orientation tour of Rostock passing by highlights such as the St. Mary's church, the town hall and the New market square.
Your tour concludes with a return to the pier in Warnemünde, passing Heinkel Aircraft Memorial along the way.

The drive between Warnemünde and Schwerin is approximately 90 minutes.

Schwerin Castle may close without notice due to governmental meetings.

Depart from ship for a scenic transfer to Schwerin by coach