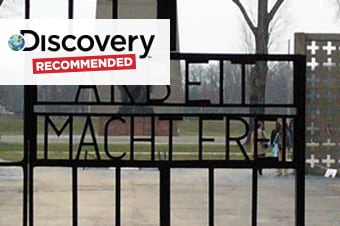 After boarding your chartered motorcoach at the pier, you'll travel through Northern Germany's rural countryside. A homemade chocolate cookie will be provided during the approximately 2.5 hour motorcoach journey en route to Oranienburg where the Sachsenhausen Concentration Camp is located. Once you arrive at the station, you'll meet your guide for the ride to the camp.

Established in 1936, Sachsenhausen was one of the first concentration camps built by the Nazis. During your guided tour (with headsets) you'll learn the history and the horrors as you walk by Guard Tower A (which housed the offices of the camp administration), the execution chamber, the laundry (which, today, is the site of a chapel), Station Z, and more.

As your guide leads you to the front entrance you'll notice the plaque on the gate that reads "Arbeit Macht Frei," a German phrase meaning "work will make you free." The prisoners were forced to work, making bricks for public buildings in Berlin. Sachsenhausen was also the site of one of the largest counterfeiting operations during World War II. Determined to undermine the economies of Britain and the United States, the Nazis forced inmates to forge American and British currency.

Over 200,000 people passed through the gates between 1936 and 1945; 30,000 inmates died from exhaustion, disease, malnutrition or pneumonia from the freezing winter cold. Many were executed or died as the result of brutal medical experimentation.

After World War II, when the Soviets divided the country, the camp was converted to a gulag to house political enemies where thousands more perished.

At the conclusion of your tour you'll board a motorcoach to Berlin where you'll enjoy a typical German lunch followed by a tour of the city. You'll spend the afternoon visiting some of the most poignant symbols of the German reunification. Some of your stops include the Reichstag, the seat of the German Parliament and one of Berlin's most historical landmarks. Nearby is the massive Brandenburg Gate. Constructed in the 18th century as a symbol of German unity, it gained notoriety as a symbol of a divided city during the Cold War. And no tour of Berlin would be complete without a stop at Checkpoint Charlie, the name of the crossing point between East and West Berlin.

You'll continue on to the Holocaust Memorial. Dedicated to the memory of the six million Jews who were murdered by Hitler and the Nazis during World War II, the memorial encompasses 205,000 square feet and contains 2,711 grey stone slabs.

On your return trip, a snack box and water will be served as the motorcoach takes you back to your ship.

Tour sequences may vary to avoid congestions at venues.
The coach for the city tour is equipped with seat belts, guests are required to use them. Guests may not stay on the coach during free time. The tour runs during all weather conditions. Guests should be prepared for the possibility of rain.

It is advisable to bring some small change of Euro coins as some shops do not accept other currencies nor Credit Cards for small purchases (furthermore, guests may have to pay for public bathroom facilities, usually between 50,- cents and 1,-Euro pp). Shopping location may vary as most shops are closed on Sundays and bank holidays. Only a few souvenir shops may be open.

Depart ship by chartered motorcoach to the city of Oranienburg

Upon arrival meet your guide and coach

Visit of the Concentration Camp Memorial

Guided transfer to Berlin by coach

Arrival in Berlin and lunch at 5* hotel

Panoramic tour of Berlin with stops at the Holocaust Memorial; Berlin Wall

Transfer to the ship