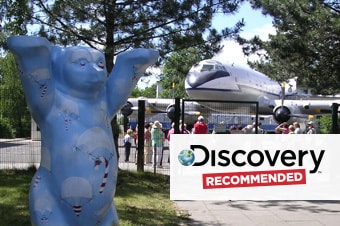 Your tour begins as you board a chartered train for an approx. 2½ -hour ride to Berlin, enjoying a snack box along the way.

Upon arriving, you'll board your motor coach for a city drive to your first photo stop to one of the few surviving pieces of the Berlin Wall.

Keep your camera ready for Checkpoint Charlie, the former border control point separating east and west, and for some East Germans, a gateway to freedom. Soviet and American tanks briefly faced off at this location during the Berlin Crisis of 1961.

You'll continue to Gendarmenmarkt Square, a 17th-century square, the site of the twin French and German cathedrals and the Concert Hall, a masterpiece of German classical architecture. Next, you'll pass Unter den Linden Boulevard, a tree-lined, east-west thoroughfare through the city of Berlin, and witness such sites as the State Library and Humboldt University, Berlin's oldest university.

Driving past Bebelplatz, you'll witness the square where the burgeoning Nazi Party held its infamous book burning. Next, you'll pass the WWII Memorial, featuring Käthe Kollwitz's emotionally moving sculpture of a mother and her dying son.

You'll continue on to the Holocaust Memorial for a photo stop. Dedicated to the memory of the six million Jews who were murdered by Hitler and the Nazis during World War II, the memorial encompasses 205,000 square feet and contains 2,711 grey stone slabs.

Now it's time for an independent visit of the famous Kurfürstendamm boulevard. During your leisure time of 80 minutes you are free to savour a delicious lunch in one of the many restaurants (at your own expenses), stroll along the broad, tree-lined avenue, boasting luxury department stores, designer boutiques, shops, cafes, clubs and restaurants.

After enjoying your exploration, you will meet again the tour group and drive by the Victory Column, a landmark that celebrates the military successes of Prussia over Denmark, Austria and France, and pass Bellevue Palace, the official headquarters of the President of Germany, and Congress Hall.

Your next photo stop is the Brandenburg Gate. As the only remaining city gate of Berlin, formerly used to exemplify the separation of the city between East and West Berlin, the Brandenburg Gate has now come to symbolize German unity. Just a short stroll away is the Reichstag (photo stop). Originally constructed to house the parliament of the newly founded German Empire, the glass dome designed by architect Sir Norman Foster is one of the city's major landmarks today.

When it's time to call it a day, you'll travel back to the train station. On the train your host will hand out a snack box and water.

This tour is guided in Cantonese.

The train ride between Warnemünde and Berlin is approximately 2 ½ hours each way. The train is air-conditioned.

The coach for the city tour is equipped with seat belts, guests are required to use them. Guests may not stay on the coach during free time. The tour runs during all weather conditions. Guests should be prepared for the possibility of rain.
It is advisable to bring some small change of Euro coins as some shops do not accept other currencies nor Credit Cards for small purchases (furthermore, guests may have to pay for public bathroom facilities, usually between 50,- cents and 1,-Euro pp). Shopping location may vary as most shops are closed on Sundays and bank holidays. Only a few souvenir shops may be open.

Tour sequences may vary to avoid congestions at venues.