Berlin on Your Own by Coach 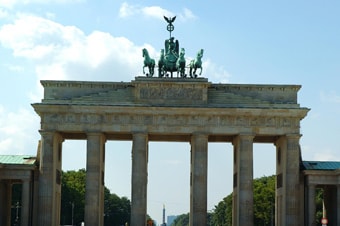 Your tour begins as you board a chartered motorcoach for an approximately 2.5 hour ride through the countryside to Berlin, enjoying a snack box along the way.

Arriving in Berlin, you will receive a map of the city and have approximately five to six hours of free time to explore, sightsee and shop on your own.

Keep your camera ready for Checkpoint Charlie, the point separating East and West, and for some East Germans, a gateway to freedom. Soviet and American tanks briefly faced off at this location during the Berlin Crisis of 1961. Close by you will also find surviving parts of the Berlin Wall – always worth a visit.

Just a short stroll away is the Reichstag. Originally constructed to house the parliament of the newly founded German Empire, the glass dome designed by architect Sir Norman Foster is one of the city's major landmarks today.

Perhaps you'd like to visit the old Jewish Quarter, passing the newly gilded Synagogue/Centrum Judaicum on your way to the western sector. Pergamon Museum on Museum Island is a "must" for history buffs, with spectacular works of archaeological antiquities, including collections of Greek, Assyrian, Islamic art. But please note that the famous Pergamon Altar is currently under renovation and cannot be visited.

Of course you can shop 'til you drop on Friedrichstrasse boulevard or Kurfurstendamm boulevard, Germany's most famous shopping boulevard. Stroll along the broad, tree-lined avenue, boasting luxury department stores, designer boutiques, shops, cafes, clubs and restaurants.

When it's time to call it a day, you'll travel back by motorcoach to the pier as you enjoy water and a snack box.

The motorcoach ride between Warnemünde and Berlin is approximately 2½ hours each way.

Local currency is recommended for shopping.

Majority of shops are closed on Sundays..

Depart from ship for a coach ride to Berlin

Return to your ship by coach