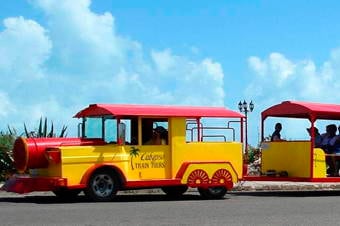 Your excursion begins at the Fort Street Tourism Village. After a brief orientation, you'll step aboard the Calypso Train to see Belize City by open-air trolley train. Enjoy the refreshing ocean breezes as your guide shares the history of this once-British settlement and a cultural diversity that has shaped this young nation.

The first viewing stop is at the Fort George Lighthouse, better known by locals as the Baron Bliss Lighthouse, named after the man buried in a tomb near its base, Baron Henry Edward Ernest Victor Bliss, Belize's greatest benefactor. In his will, the millionaire left nearly $2 million to the country, along with his wish to be buried by the sea near an obelisk or lighthouse. A 50-foot lighthouse on the harbor was erected. The funds were also used for improvements throughout the country, among them a cultural center and a school of nursing.

Your ride will take you through contrasting districts, from the affluent residential homes such as the Governor's Mansion and Prime Minister's mansion, to the working class neighborhoods bustling with daily life. At the height of the mahogany trade during the late 1800s, the city's Southside housed many of the slaves' quarters, and some of the original structures still exist today.

Continue downtown where you'll pass many fine examples of restored Colonial architecture. See St. John's Cathedral, Central America's first Anglican Church, built in 1812 by slaves using ballast bricks from the ships, and Belize's oldest surviving building.
Enter a different era upon arrival in Belize's commercial hub, as the majority of the historic buildings are still standing or have been restored. The Supreme Court Building, constructed in 1926, still functions as the country's highest court. The narrow streets of this business district are lined with quaint shops and small boutique hotels, a delightful blend of old and new.

Get your cameras ready for crossing over the iconic Swing Bridge located at the mouth of Haulover Creek, where the waterway is lined with charming fishing boats and water taxis. Reportedly the only manually operated bridge of its kind in the world, the bridge connects the south and north sections of downtown.

Your return route takes you pass Memorial Park, which honors the fallen soldiers of World War I. Lining the streets around the park are fine examples of Colonial mansions. Back at the Tourism Village, enjoy free time to browse the wide variety of local handicrafts and souvenirs at the shops in the area.

Suitable for those with collapsible wheelchairs, but not wheelchair bound. Maximum weight to participate is 350 pounds.

Walk through Tourism Village for greeting and orientation about trolley train

Continue sightseeing in town aboard trolley train, pass cathedral and other points of interest