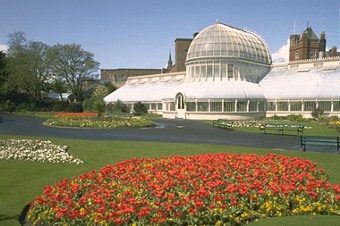 Belfast (driving tour)
Originally named 'Beal Feirste'-Gaelic for 'mouth of the sandy fjord'-Belfast was founded in the 17th century and prospered in the industrial age, becoming famous for its shipyards and linens. The city has seen decades of political strife but has rebounded and now boasts a vibrant waterfront district and lively pub scene. Your narrated drive takes you past a host of popular sights and historic landmarks showcasing Belfast's industry and elegance, a rich and varied past, and 19th-century buildings that are a reminder of prosperous former days.

Botanic Gardens
A brief, independent stroll through the Botanic Gardens is an opportunity to enjoy the colorful blooms and the Palm House, a superb structure of cast iron and curved glass panels built even before Kew Gardens opened in London in 1839.

Gaze out the window as the top attractions of Belfast go by on your comprehensive driving tour. See the stately Grand Opera House, a host of Victorian and Edwardian buildings with elaborate sculptures, the Albert Memorial Clock Tower, the Queen's University, City Hall, and the Titanic Memorial. Your drive will take you to conflicting neighborhoods, where a series of brightly painted political murals are located. At Cave Hill, you will view Belfast Castle, one of the most celebrated landmarks of the city, whose presence is ingrained into Belfast's social history and culture, and the Harland & Wolff shipyard, where the Titanic was built and launched.

Photo Opportunities:
Political Murals on almost every gable wall telling the story of its violent past and its belief in the future. Belfast came to world attention with the outbreak of the 'Troubles' in the 1960s. Conflict lasted until the Good Friday Agreement of 1998. Popular art played a prominent role during the Troubles. The gable ends of houses were painted with vivid murals to proclaim a neighborhood's political affiliations and remain a much-photographed part of Belfast's past.

A minimum number of participants are required for this tour to operate. If that minimum is not met then tour may be subject to cancellation.

Please note it is not always possible to stop on Shankill and Falls Roads, due to them being one way streets and a Business district nearby. Alternatively, it may be a different political wall mural that you may see. Order of sites visited may vary.

The walk through the Botanic Gardens is optional and at the guest's own pace.