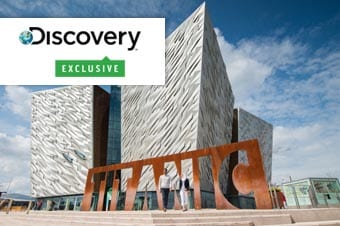 Belfast (driving tour)
Originally named 'Beal Feirste'-Gaelic for 'mouth of the sandy fjord'-Belfast was founded in the 17th century and prospered in the industrial age, becoming famous for its shipyards and linens. The city has seen decades of political strife but has rebounded and now boasts a vibrant waterfront district and lively pub scene. Your narrated drive takes you past a host of popular sights and historic landmarks showcasing Belfast's industry and elegance, a rich and varied past, and 19th-century buildings that are a reminder of prosperous former days.

Crumlin Road Gaol
The Victorian-era Crumlin Road Gaol first opened its gates to prisoners in 1846 and was a fully operational prison for 150 years. Walk the halls of this historic building, now fully renovated, on a self guided audio tour, step back into its eerie past, even entering the cells that housed prisoners of old. The spine-tingling adventure continues when you sit down to lunch in this foreboding environment-one of the most unusual meals you'll have ever had, to be sure!

Titanic Belfast® Exhibit
The tale of the ill-fated Titanic unfolds at the former shipyard of Harland and Wolff, which has been converted into a striking, ultra-modern exhibit space for Titanic Belfast®. Your tour (with audio guides) will take a fascinating look into the construction and launch of the 'unsinkable' ship and the history of the city that proudly built her. The Titanic set sail on April 2, 1912, amidst fanfare and excitement. Most of Belfast came out to watch it sail into the horizon, never imagining that just days later, the 882-foot-long ship would collide with an iceberg. Step inside the state-of-the-art 118,400-square-foot building and explore the nine galleries on six floors.

What you will see along the way:
Gaze out the window as the top attractions of Belfast go by on your comprehensive driving tour. See the stately Grand Opera House, a host of Victorian and Edwardian buildings with elaborate sculptures, the Albert Memorial Clock Tower, the Queen's University, City Hall, and the Titanic Memorial. Your drive will take you to, Peace Wall Murals where a series of brightly painted political murals are located.

Photo Opportunity:
Grab your camera for a photo stop at City Hall, an ornate building completed in 1906, surrounded by a square that is home to a statue of Queen Victoria.

Lunch:
The spine-tingling adventure at the Crumlin Road Gaol continues when you sit down to lunch in this foreboding environment-one of the most unusual meals you'll have ever had, to be sure!

Two parts of the Crumlin Road Gaol tour are not fully wheelchair accessible – the tunnel and the drop cell. Due to the building being a Grade A listed building, they are unable to put lifts in these areas. There is a screen just outside the entrance to the tunnel that shows those guests unable to enter the tunnel what it is like inside. The execution cell is accessible; however the drop cell is inaccessible for wheelchair users due to the steps. This tour involves around one hour of walking, which includes steps. Flat, comfortable shoes are advised. The tour of Titanic Belfast will be guided with use of audio-guides.

Depart Titanic Belfast for return drive to the ship