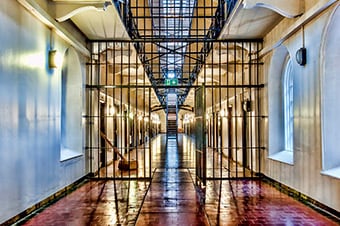 Belfast (city drive)
Originally named 'Beal Feirste'-Gaelic for 'mouth of the sandy fjord'-Belfast was founded in the 17th century and prospered in the industrial age, becoming famous for its shipyards and linens. The city has seen decades of political strife but has rebounded and now boasts a vibrant waterfront district and lively pub scene. Your narrated drive takes you past a host of popular sights and historic landmarks showcasing Belfast's industry and elegance, a rich and varied past, and 19th-century buildings that are a reminder of prosperous former days.

Crumlin Road Gaol
The Victorian-era Crumlin Road Gaol first opened its gates to prisoners in 1846 and was a fully operational prison for 150 years. Walk the halls of this historic building, now fully renovated, on a self guided tour and step back into its eerie past, even entering the cells that housed prisoners of old.

Gaze out the window as the top attractions of Belfast go by on your comprehensive driving tour. See the stately Grand Opera House, a host of Victorian and Edwardian buildings with elaborate sculptures, the Albert Memorial Clock Tower, the Queen's University, City Hall, and the Titanic Memorial. Your drive will take you to conflicting neighborhoods where a series of brightly painted political murals are located.

A photo stop will be made at City Hall, an ornate building completed in 1906, surrounded by a square that is home to a statue of Queen Victoria, the marble figure of Thane, and the Titanic Memorial. Your drive will take you to neighborhoods , where a series of brightly painted political murals are located. A short stop will be made here for you to view and photograph this poignant artwork.

Two parts of the Crumlin Road Gaol tour are not fully wheelchair accessible - the tunnel and the drop cell. Due to the building being a Grade A listed building, they are unable to put lifts in these areas. This tour involves around one hour of walking, which includes steps. Flat, comfortable shoes are advised.

It is not always possible to stop on Shankill and Falls Roads, due to them being one way streets and a Business district nearby. Alternatively, a different political mural stop will be made.

Depart from the ship & travel to Belfast City for a panoramic tour.