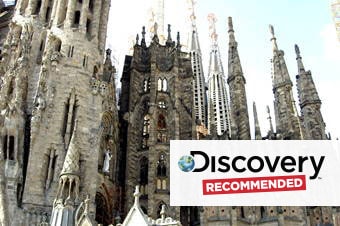 Barcelona is a beautiful European city begging to be discovered, and this four-hour tour, through the bustling streets is enough to satisfy any curious traveler.

Your exciting day begins the moment you board the bus at port, where your guide will be happy to offer wonderful snippets of information about this joyous city.

You will pass the Columbus Monument. This impressive Corinthian column was erected in 1882 for Christopher Columbus, in order to celebrate his historic return from the Americas. Continue to the wonderful Arc de Triomf, a red brick Moorish archway that was built in 1888, and contains a frieze with the words 'Barcelona Welcomes The Nations' sculpted in stone on the front.

Then it's on to the awesome La Sagrada Familia church, where you can explore this unfinished yet striking modernist religious center that boasts massive flamboyant spires. Incredibly, the church has been under construction since 1882 and will only be completed around 2026, but a portion of the interior is open for public worship. Considered the masterpiece of Catalan architect Antoni Gaudi, who died in 1926, it has been one of Spain's top tourist attractions for many years. Your guide will describe the church's features in detail, including the massive nativity facade and modern stained glass windows. The Gaudi Museum located on the lower levels traces the architect's life and achievements.

After souvenir shopping, it's back on to the bus to discover more gems including the Paseo de Gracia, also known as the Passeig de Gràcia, one of the most opulent avenues in Barcelona and an important shopping and business district, before continuing along to view another of Gaudi's masterpiece's, the modernist house of La Pedrera. This remarkable building is now a museum and features undulating, smooth stone walls and elaborate iron balconies. You will drive past Casa Amatller, another modernist building that was constructed in 1898 for chocolatier Antoni Amatller, and also Gaudi's Casa Batllo, known locally as 'Casa dels Ossos', the House of Bones, thanks to its dramatic skeletal quality.

You will pass by the wonderful Plaça Catalunya, a large picturesque square located in the center of Barcelona, known for its fountains, statues and friendly flocks of pigeons.

The final part of this memorable bus tour takes you for a panoramic view of the Olympic Ring, the stunning stadium complex that was created for the 1992 Summer Olympics, on the way to Montjuic Mountain for a photo stop at a breath-taking viewpoint. Here you will be able to enjoy incomparable panoramic views of the city, before heading back to the pier, your life all the richer for exploring this jewel of a city.